AMD's Ryzen 7 5800X3D is a bizarre processor. Historically, to make a faster CPU, you either improve the architecture or increase the clock rate, but AMD made huge, double-digit percentage gains in gaming by simply slapping an extra 64MB of L3 cache on top of its existing CPU. The company's about to do the same thing with its Zen 4-based Ryzen 7000 processors, and according to recent analysis, it may see even bigger gains.


This information originates with Tom Wassick, who does semiconductor packaging stuff for IBM, although he posted the news on his personal Twitter account and not as an IBM employee. After delidding his Ryzen 5 7600X and removing the thermal interface material, he noted that there appear to be more Through-Silicon Via (TSV) columns, "including at least 2 much larger and denser arrays." That implies that AMD designed the Zen 4 CCD to be more optimized for the installation of 3D V-Cache, with greater throughput between the cache die and the compute die.

TSVs are essentially channels in a microprocessor that allow connections to be made through the silicon (thus the name). In this specific case, the only likely use for them would be for the application of vertically-stacked cache, which AMD calls 3D V-Cache. The company already announced that there will be 3D V-Cache versions of the Ryzen 7000 processors, and rumors have them showing up early next year—possibly with an announcement at CES.


Tom also notes that he observes a reduction in TSV pitch, or the spacing between the connections. In combination with expanded size, we're likely looking at significantly improved transfer rates between the CCD and the cache die. That lines up neatly with earlier rumors that implied that the Ryzen 7000 series sees a greater gain from the application of 3D V-Cache than the Ryzen 5000 series did. 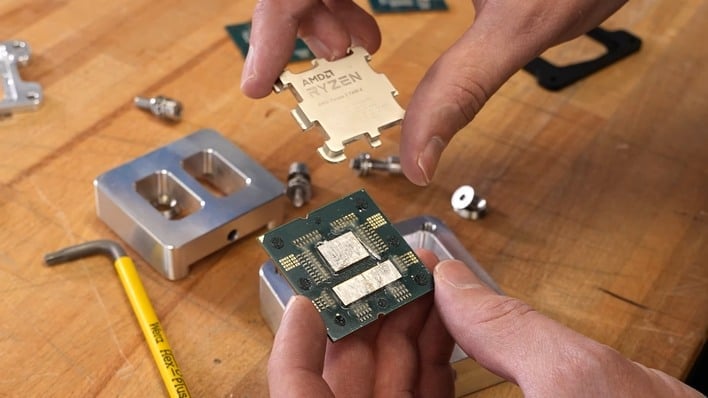 Der8auer's 7600X unexpectedly had two CCDs underneath, but one was nonfunctional.


Unlike Der8auer, who found two CCDs under his Ryzen 5 7600X, Tom's model only came with one CCD. That indicates that there's some variance in manufacturing, and confirms that Der8auer's model was likely a defective 7900X that got reused as a 7600X. This probably doesn't actually affect anything in a practical sense, but it's one more interesting data point.

One thing we shouldn't expect from the Ryzen 7000 "X3D" processors is improved performance in productivity apps. While AMD's had a solid lead on Intel for the last couple of CPU generations in productivity, Intel's more-or-less evaporated that lead with its latest 13th-generation processors while taking a small lead in gaming, too. It will be fascinating to see if AMD can blow past Intel in gaming with 3D V-cache once again.