YouTube TV subscribers could see a lower monthly bill, albeit perhaps only temporarily. That's the good news (sans the temporary part). Unfortunately, the cheaper bill would come at a different type of cost—the loss of NBC programming. Google's agreement with NBC Universal is about to expire, and two sides have not been able to reach an agreement on an extension.
This happens on occasion between service providers and networks, and it is always the customer that gets caught in the cross fire. Usually, these negotiations stay out of the public eye. But when two sides fail to reach agreeable terms with each other, they take the feud public (well, semi-public) and each one tries to persuade subscribers that it's the other one's fault.
So let's start with Google.
"Our ask is that NBCU treats YouTube TV like any other TV provider. In other words, for the duration of our agreement, YouTube TV seeks the same rates that services of a similar size get from NBCU so we can continue offering YouTube TV to members at a competitive and fair price. If NBCU offers us equitable terms, we’ll renew our agreement with them," Google says.
Put another way, Google is suggesting that NBC Universal's asking price to renew its contract with YouTube TV is too high and unfair. Maybe it is, maybe it isn't—there is no way to know, because details of the discussions are not made public. This is really about using cord cutters as leverage, in an attempt to get them to pressure the other side.
NBC Universal is playing the same game, and has put together a website that sounds the alarm on what could potentially happen. 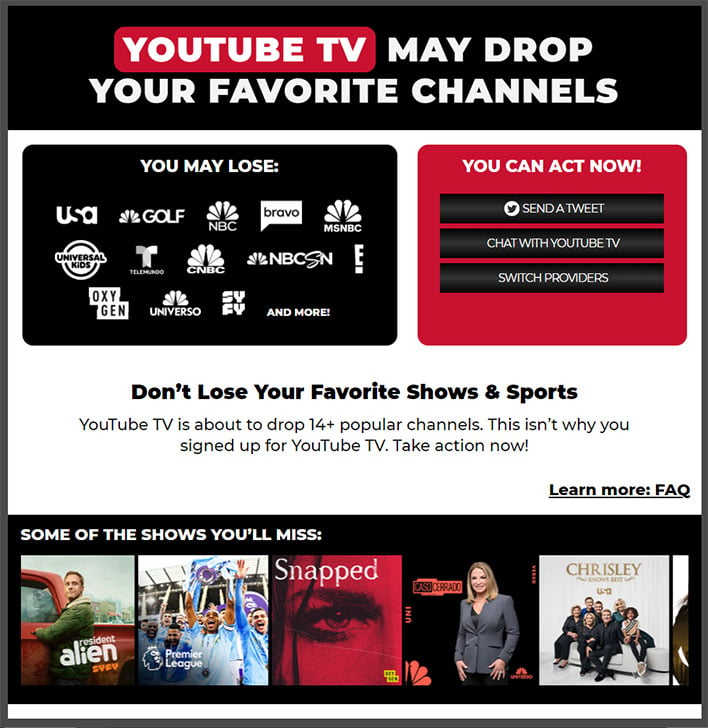 "Television networks enter into carriage agreements with providers like YouTube TV to provide networks to their customers. NBC Universal and YouTube TV are in the process of renewing their partnership," NBC explains in an accompanying FAQ.
"NBC Universal has a strong record of completing these network carriage agreements with hundreds of distributors without interruption. NBC Universal doesn’t like involving audiences in this process but feels a responsibility to inform YouTube TV subscribers and potential YouTube TV subscribers, that 14+ of their favorite channels may be dropped," NBC added.
NBC goes a step further and asks subscribers to action. It provides three links—one of them readies a pre-composed tweet, another sends subscribers to Google's support chat, and the last one provides contact details for anyone who wants to switch providers.
So what happens now? Well, both sides will continue to pit subscribers against the other, which is annoying. Even more annoying, if Google and NBC can't reach an agreement by this Thursday, September 30, the latter's channels will disappear from YouTube TV, and the subscription price will decrease.
If that happens, YouTube TV will drop in price from $64.99 to $54.99 for as long as NBC's content stays off the platform. In the same breath, Google points out that subscribers could sign up for NBC's own Peacock streaming service for $4.99 per month.
"NBCU is an important partner for us and as you can imagine, this is not the outcome that we want," Google says.
On the bright side, Google and NBC remain in "active conversations" with each other. My guess is they'll get this hammered out, eventually. In the meantime, this nonsense will continue to play out in the public eye. For more info, check out Google's full YouTube TV statement and NBC's FAQ.