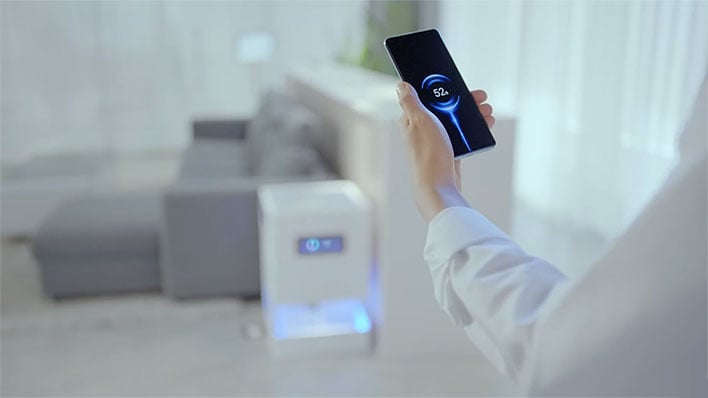 Wireless charging already exists, in that you can juice up your smartphone without jamming a cable into its charging port. Instead, you plop it on a charging pad or stand. It's convenient, sure, but it is not the end game. Getting us closer to wireless nirvana, Xiaomi has introduced its Mi Air Charge technology, which allows you to wirelessly charge your phone without putting it down.
Xiaomi says "it's not science fiction," but we say it is, and the company should own it. This is the sort of thing you might see in a Hollywood movie set in the future. Except it now exists, and it is really damn cool. There is a catch, however—the wireless charging base that makes this voodoo magic possible is about the size of a nightstand.
In a promotional video, Xiaomi does its best to disguise the fact that this is a big accessory, by having it blend in with a neat and tidy modern home decor. It would stick out like an eyesore next to my cat trees and various clutter, but whatever, it's a first-gen product. Anyway, have a look...

This is described as an "isolated charging pile" consisting of five phase interference antennas built into the base station. A total of 144 antennas transmit millimeter-wide waves and use beamforming technology (common in modern routers) to detect the location and make a beeline towards your handset.
It offers up 5 watts of charging power with a range of "several meters." The base station also supports multiple devices, though it's not clear if that means more than two. However, Xiaomi did say that each one gets a full 5 watts of power.

As you might expect, this requires special hardware on the smartphone side, too. Xiaomi says it developed a miniaturized antenna array consisting of a built-in beacon antenna that broadcasts position information while drawing little power, and a receiving antenna array comprised of 14 antennas tasked with convering the millimeter wave signals into elecrtic energy, through a rectifier circuit.
For now, this is intended only for smartphones. In the future, however, Xiaomi says its charging technology will be able to work with other types of devices as well, including smartwatches, bracelets (which we assume to mean fitness bands), and other wearable gadgets.
It's not yet clear when this technology will find its way into commercial devices.