With Samsung having fast-tracked its upcoming Galaxy S21 family, we assumed that it would be among the first (if not the first) to feature Qualcomm's burly new Snapdragon 888 5G Mobile Platform when it arrives in mid-January. Well, Xiaomi is here to steal the show with the announcement of the Mi 11, which takes claims the "first" crown when it comes to the Snapdragon 888.

Besides the inclusion of Qualcomm's latest flagship SoC, which just so happens to feature an integrated next-gen Snapdragon X60 5G modem, the Mi 11 has all the trappings of a modern flagship Android smartphone. That means that it comes with either 8GB or 12GB of RAM, and either 128GB or 256GB of speedy UFS 3.1 internal storage.

Your main point of interaction with the device will be via its display, which measures a relatively large 6.81 inches across with a QHD+ resolution (3200x1440). The display also sports variable refresh rate technology, which means that that it can go down to as low as 30Hz to preserve battery life or crank to 120Hz for fast-paced games. The display is covered with Corning's ultra-strong Gorilla Glass Victus for added durability and scratch resistance. 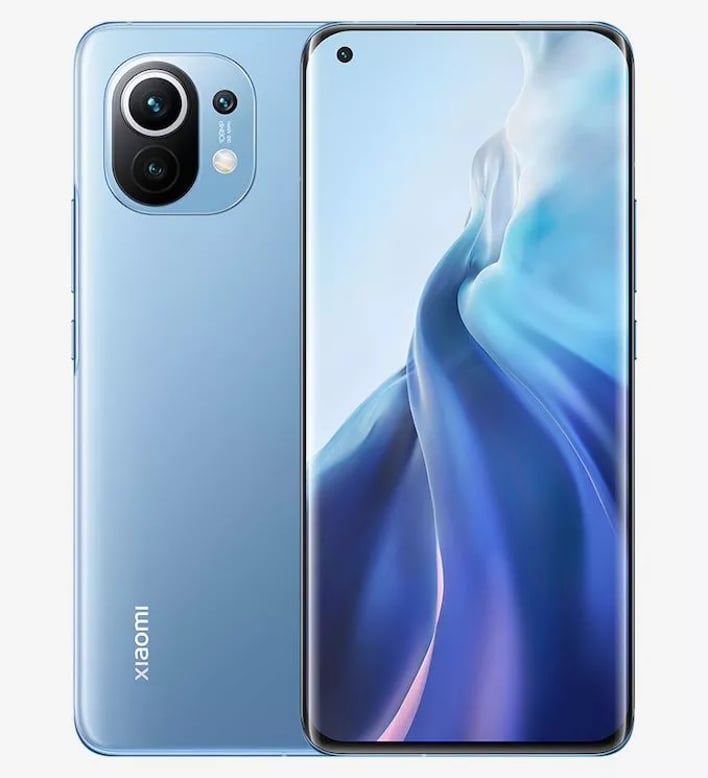 When it comes to cameras, on the back you'll find a 108MP primary sensor with optical stabilization. It is joined by two other cameras: a 13MP ultra-wide-angle sensor (123-degree FOV) and a 5MP telephoto macro sensor. A 20MP selfie camera is installed up front, nestled within its hole punch notch.

Moving on to what's fueling this beast of a flagship smartphone is a beefy 4,600 mAh battery. Topping the battery off is accomplished using either 55W wired charging or 50W wireless charging. However, there's a rather interesting development when it comes to recharging. After Xiaomi mocked Apple for not including a USB-C wall adapter in the box with the iPhone 12 and iPhone 12 Pro families, it has taken the same approach by not including one with the Mi 11. Word on the street is that Samsung will also leave out the USB-C power brick with the Galaxy S21 Ultra (after it too mocked Apple).

Although there are likely no plans to bring the Xiaomi Mi 11 here to the United States, it will be available in China starting on January 1st priced from 3,999 Yuan ($612) for the base 8GB/128GB RAM/storage configuration.