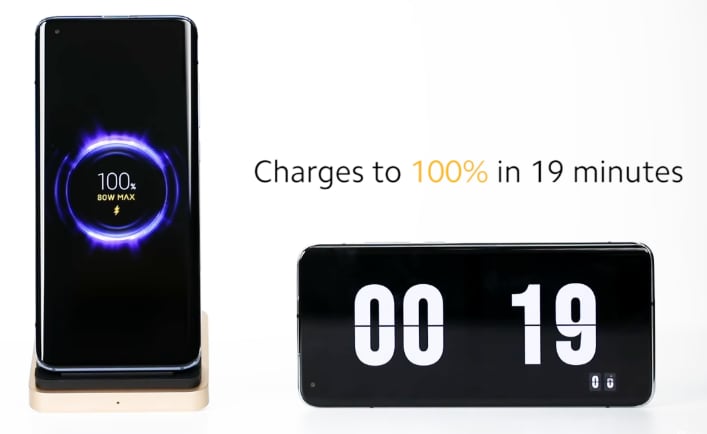 There's a war brewing in the smartphone world, and it has nothing to do with iOS versus Android, or who can cram 5G into the cheapest device. Rather, it's a competition to see who can deliver the fastest wireless charging solution for smartphones. To that end, it looks as though Xiaomi has thrown down the gauntlet with its latest solution, which can charge a 4,000 mAh battery in under 20 minutes.

Xiaomi is currently shipping the Mi 10 Ultra, which supported 50W wireless charging. In that iteration, the smartphone's 4,500 mAh battery can be fully topped off in 40 minutes. But Xiaomi's new 80W charging system allows a 4,000 mAh battery to be charged from empty to 100 percent in just 19 minutes. A 50 percent charge was achieved in only 8 minutes. You can see the feat being achieved in the video below:

Of course, many people are already wondering how safe this system will be for the battery, and if repeated charging at 80W will shorten its lifespan (or fry it like a piece of bacon). However, we'd have to assume that Xiaomi has put in place a number of failsafes to prevent premature overheating and/or added wear on the battery. And unfortunately, Xiaomi devices aren’t officially sold here in the United States.

Despite the fact that companies like Xiaomi and Oppo are innovating rapidly in the wireless charging space, the solutions available to U.S. customers are still well behind. The fastest wireless charging solution currently available in the United States is OnePlus' Warp Charge 30 (30W) for the OnePlus 8 Pro. The OnePlus Warp Charge 30 Wireless Charger can take the OnePlus 8 Pro from a 0 percent charge to 50 percent in 29 minutes, putting it far behind Xiaomi's 80W solution.