Technology showcases are one thing, but I have to tip my cap at AMD for its full Hangar 21 technology demonstration, because it is intelligently annotated to point out aspects of the rendered scenes that might otherwise go overlooked or underappreciated. Even if you have already decided that Ampere is the GPU for you, it is worth watching the demo in full to see what exactly some of the buzzwords are, that you might have heard about.
Like volumetric lights and real-time global illumination, to give a couple of examples. AMD is not exactly breaking new ground in the advanced graphics department, as NVIDIA has been delivering real-time ray tracing and next-level visual goodies since Turing was introduced, and now with its latest generation GeForce RTX 30 series cards.
However, AMD is now in the mix at the high-end in graphics—check out our Radeon RX 6800 XT and 6800 review for in-depth analysis and benchmark data. AMD is also pushing FidelityFX, an open source image quality toolkit that developers have at their disposal, to make games shine on RDNA 2 (and RDNA 1, actually).
The full demo is not super long, checking in at around four and a half minutes. Take a look...

Obviously AMD has a vested interest in hyping its own graphics architecture and capabilities. At the same time, it is an informative tech demo with decent, quick explanations of certain technologies. For example, "God Rays," which is a volumetric effect caused when direct light passes through a dusty or foggy atmosphere. Again, this is not new, but it is nice to have it specifically pointed out.

There are also a few 'wow' moments throughout the demo. One that stands out to me is volumetric fog, starting at the 1min23sec mark. AMD describes it as a "realistic simulation of the interaction of light and fog for more atmospheric visuals," while I simply say it is a neat effect, enough said. 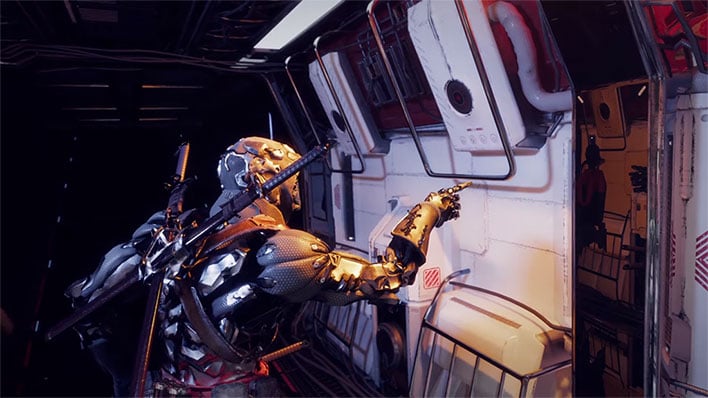 While I do not know if this was intentional or not, there is a Spider-Man meme moment that made me chuckle, starting at around the 2min48sec. The space cadet stops and stares into a mirror, then points at himself, similar to the popular meme.
I'm not sure FidelityFX is the tipping point AMD hopes it is, for anyone pondering a Radeon RX 6000 or GeForce RTX 30 series graphics card. That said, there are a bunch of games that implement at least one FidelityFX technology. The list includes games like Dirt 5, F1 2020, Far Cry 6, Gears 5, Godfall, Microsoft Flight Simulator, Resident Evil 3, Star Wars Jedi: Fallen Order, and others.
For some, the real decision might very well come down to whichever card they can actually buy. This has been the year of out-of-stock gaming hardware, and hopefully things ease up in the near future.