Here's Your Chance To Win Mandalorian-Themed Xbox Controllers From Microsoft

The season 2 finale of the hit Disney+ series “The Mandalorian” is upon us. To celebrate, Microsoft collaborated with Lucasfilm Games to create “two new epic Mandalorian-themed Xbox Wireless Controllers,” which could potentially be some of the coolest controllers ever. Alas, they are not for sale, but you can win the pair in Xbox’s Twitter giveaway detailed below. This is the way.


If you are a Mandalorian fan or Star Wars nerd, these controllers should have you excited, and rightfully so. Elliot Hsu, the principal designer for Xbox, explains that the “custom controllers feature sketches of the now iconic Child wielding the Force and the steely Mandalorian’s beskar armored profile.” The Child, now known as Grogu, appears on a controller with a color dubbed “Tatooine tangerine,” while Mando comes on a “Tython turquoise” controller. Simply put, they look fantastic, and you can win them.

This is the way.

Follow @Xbox and RT with #TheMandalorianXboxSweepstakes for a chance to win controllers inspired by @TheMandalorian.

Hsu writes that “From December 17 to 28, fans who are 18+ that reside in the United States who follow @Xbox can retweet the Xbox sweepstakes tweet with #TheMandalorianXboxSweepstakes for the chance to win” the controllers. They will come in an “exclusive Star Wars-themed mailer,” which you can see below. 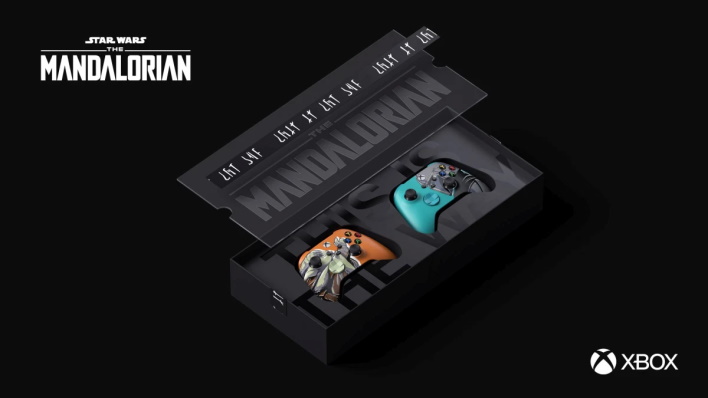 If you are not up to speed on “The Mandalorian,” Xbox added a 30-day Disney+ trial as a perk for Xbox Game Pass Ultimate members, so you can catch “The Mandalorian” and all the other Disney content. There is also a Minecraft Star Wars DLC in the Minecraft Marketplace that you can check out to enjoy Star Wars and Mandalorian locations.

This holiday giveaway is pretty sweet, and I definitely want those controllers for myself. Maybe we will see a limited run of similar controllers in the future if we are lucky. In any case, let us know what you think of the Grogu and Mando controllers in the comments below. I have spoken!