Would You Hang Out In A WhatsApp Community? Because It's Apparently A Thing

WhatsApp is a very popular communications app with millions of users that is owned by Meta, formerly known as Facebook. Now there is evidence that the app may be adding a new feature soon aimed at improving its communities experience.

Facebook has been receiving a lot of negative attention as of late due to the internal leaks and how it uses data it collects about its users. That blowback was not isolated to Facebook alone, however. Following the recent server outage it is estimated that Telegram, another secure communications app, saw an increase of around 70 million users. So, it is no surprise that WhatsApp is looking for new ways to keep its existing users and perhaps win back a few it may have lost.

The possible new Communities feature seems to be directed toward giving group admins more control over groups. Essentially, admins will be able to create a sub-group similar to how channels are used in Discord. This should make it a lot easier to keep conversations on topic as well as making them easier to find. So, if an admin were to see a new topic trending they could create a independent community and then redirect that conversation to that focused group to carry on the chatter. 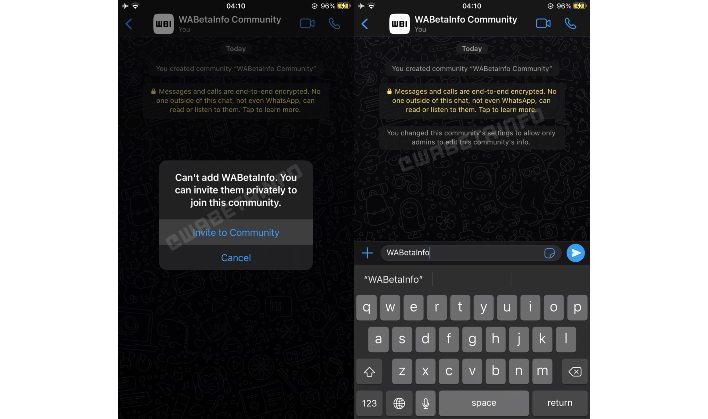 This newly found information indicates admins will be able to invite other people to join a community, or users themselves will be able to do so if admins have made the link to the group public using a "Community Invite Link". The feature is obviously still under development so more functionality could be added before it is made public. You can see an example of how it may look above, thanks to WaBetaInfo.

WhatsApp directly competes for users with both Telegram and Signal, which have seen increasing numbers lately. One of the reasons for this is security and privacy. WhatsApp has end to end encryption in its list of security features and it seems that it will also be part of the Communities sub groups. That will be good news to existing users and those that may want to come back so they can keep in touch with friends on the app.

The Communities feature should make WhatsApp a more clean and focused app to use. It can be difficult to keep up with a particular conversation when multiple users are talking about multiple things all at one time. So, being able to find a group that is talking about the specific subject matter you want to discuss should make the experience a lot better.

As Meta continues its journey into the metaverse, it will be interesting to see how it incorporates WhatsApp into it. With an ever-growing market to compete in, it will need to continue to add new features and advance its user experience to keep up. And there is the looming question, will the app be renamed WhatsMeta as well? That's kind of catchy after all.