When someone gets up and walks away from their computer for an extended period of time, they either power it off or it goes into sleep mode. Both options can take quite a bit of time to recover from when you want to get back to work or gaming. Microsoft created the Modern Standby feature to solve this issue, which allowed Windows 10 devices to enter an idle state where they could still connect to the network and do background tasks. Now, that same functionality will be launching with Windows 10X to improve the laptop Windows experience.


The Windows 10X OS is one of Microsoft’s best worst-kept secrets in the past year. The goal of Windows 10X is to provide a simple user experience and be incredibly straight forward. As Windows 10 gets new features, Windows 10X is likely getting the same treatment in the background, as it is built on the Windows 10 core. These updates to Windows 10X are evidenced by Microsoft sneakily updating documentation for things such as “Modern Standby,” which you can see below. The doc now explains that Windows 10X will have the feature whenever the OS launches. 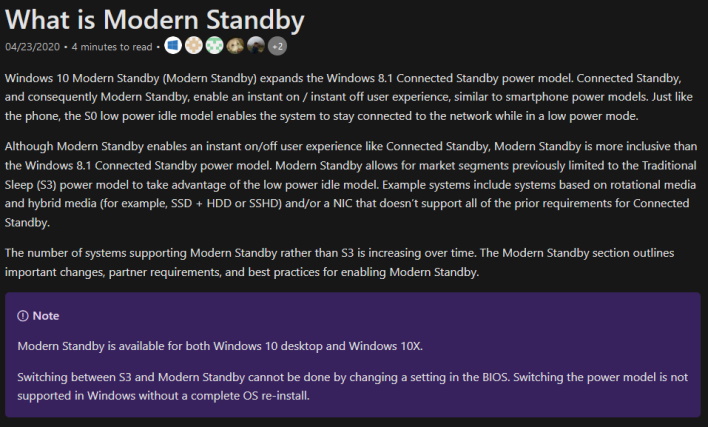 As WindowsLatest explains, “On Windows 10X devices, modern standby experience could be similar to the way phones work.” You would still get notifications and information while the device in a sleep state as modern standby allows networking in the background. This could be incredibly useful should Microsoft decide to launch a Windows 10X version of their Surface Duo or a whole new device entirely.

Overall, we will have to see what happens with this and other Windows 10 features in the future. The modern standby documentation is the only place that Windows 10X is mentioned, but that could change if Microsoft starts opening up about the OS. If they do, keep an eye on HotHardware for the latest on Windows10X.