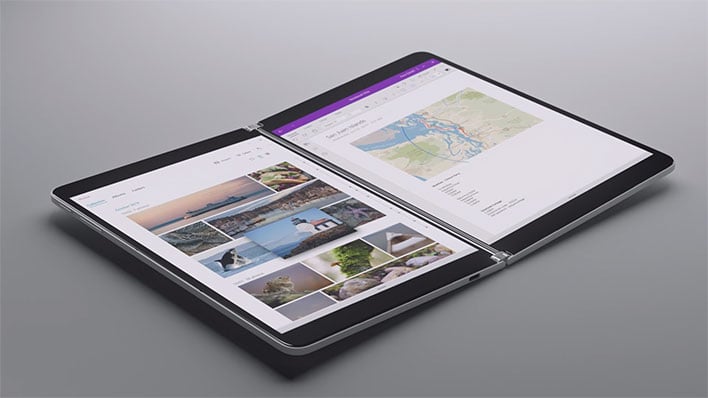 Back at the Surface event in early October, Microsoft unveiled a dual-screen device called Surface Neo, along with a Windows 10X operating system that is being designed from the ground up for it and similar dual-screen and foldable gadgets. Details on the OS are still fairly light, but in a bit of good news, it looks like Windows 10X will support Win32 apps.
You can think of Windows 10X (codenamed Santorini) as a sort of light edition of Windows 10. There are currently no plans to bring Windows 10X to existing desktops and laptops. Though that could change in the future, Windows 10X as currently conceived is strictly for a new set of form factors, such as dual-screen devices.
The OS could be hampered if it only supported Universal Windows Platform (UWP) apps, but the folks at Windows Latest found apparent confirmation to the contrary. It's a LinkedIn job posting for a principal software engineering lead to join the Azure Core OS Kernal team. Specifically, the person who gets hired would lead and the manage a team within that group to work on Containers.

"The Containers team collaborates with teammates throughout Windows to design, develop, and enable new scenarios that leverage containers for improved security, isolation and compatibility.  These technologies form the basis for Store-delivered Win32 applications, Windows Server Containers, Windows Defender Application Guard, Windows Sandbox, and Win32 application support for Windows 10X on dual-screen devices like Surface Neo," the job listing states.
So there it is, 'hiding' in plain view. Based on the job description, it seems the only way Windows 10X would not support Win32 apps is if something goes awfully wrong during the development process. That is not likely to happen.
Win32 app support in Windows 10X is not something that has been communicated by Microsoft, but it might be soon. A separate job listing seeks a senior product marketing manager to deliver "product positioning and messaging for Windows 10X devices."
Both Windows 10X and the Surface Neo are slated to arrive in holiday 2020.