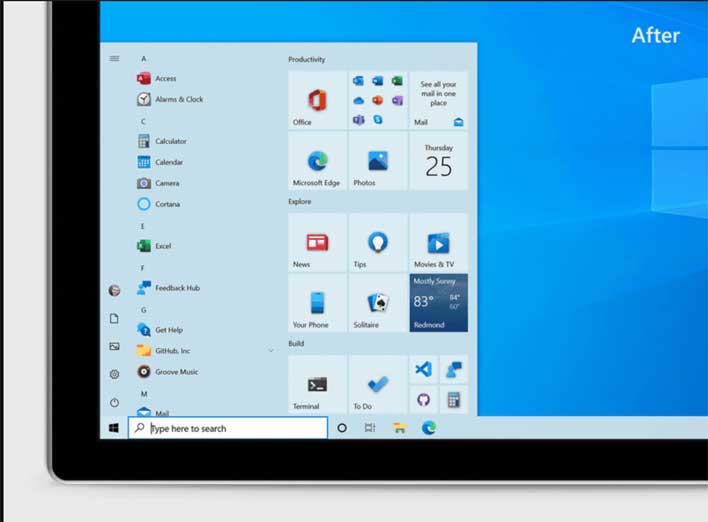 Microsoft has announced that the latest Windows 10 Insider Preview build is available for insiders in the Beta Channel. The new version is called the Windows 10 Insider Preview Build 19042.421 (20H2). Several things have been changed in Windows for the new 19042.421 build, including theme-aware tiles and and the new Start menu. The image above shows what the new Start menu tiles look like.

Microsoft says that the freshening of the Start menu includes a more streamlined design removing the solid color backplate behind the logos in the apps list and applies a partially transparent background to the tiles. The change is meant to give a more attractive background for app icons, particularly for Fluent Design icons for Office and Edge. The design is intended to be functional in both dark and light themes. Users running the dark theme can apply color accents to the start frame and tiles.

In the new update, users can now ALT + TAB between apps and sites, making multitasking easier. With the new build, all tabs open in Microsoft Edge will appear in the ALT + TAB menu rather than only the active tab in each browser window. Users can choose to stick with the classic ALT + TAB experience in the settings menu. Microsoft does note that users wanting to take advantage of the new feature will have to be on a Canary or Dev build of Microsoft Edge, version 83.0.475.0, or higher. 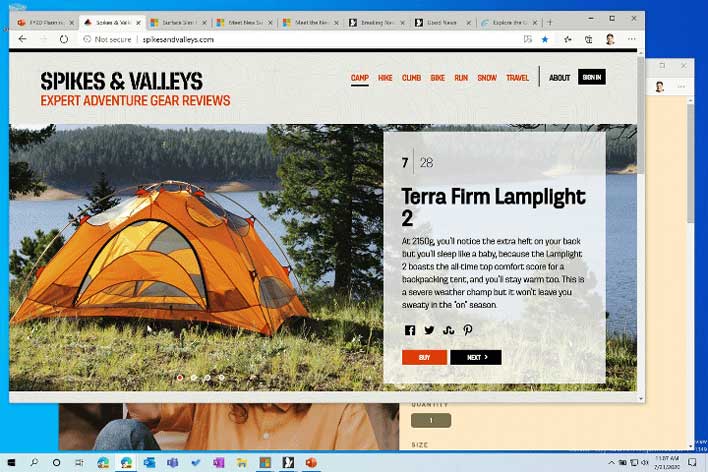 Improvements have been made inside Microsoft Edge for pinned sites. Users will be able to get quicker access to pinned sites by clicking a site pinned on the Taskbar to see all open tabs for that site across any Microsoft Edge Windows. That feature does require Microsoft Edge Insider Build 85.0.561.0 or higher from the Canary or Dev Channel. Users will need to remove and re-pin existing sites on their Taskbar.

This build also includes new personalization options on the Taskbar for new users. The new Programmable Taskbar experience is limited to new account creation or first logon scenarios only. Notifications have been improved, making it easier to determine where the notification is coming from and dismiss it by clicking the X in the top right corner. The Focus Assist notification and summary toast is now off by default. A myriad of other changes, improvements, and fixes are featured inside the new Insider Preview Build, and the full list can be seen on the Windows blog.

A few days ago, Microsoft announced that it had begun to investigate the Windows May 10, 2020 update bug that had caused issues with Wi-Fi for some users.