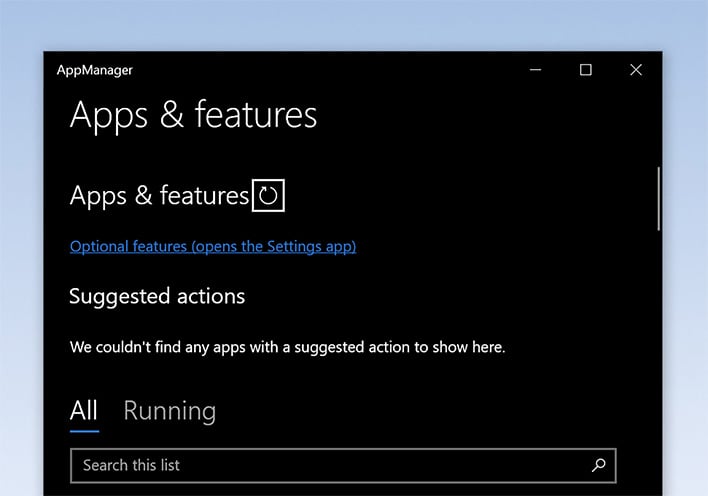 Look, we all know that Google's Chrome browser can be a bit of a memory hog at times. He's like the guy in group who completely ignores social etiquette when it comes to sharing appetizers, and helps himself to the lion's share of cheese sticks, including the last one that no one else dares take. Not because of mold or any such nonsense, but because that's the ritual—you leave the last appetizer on the plate for the next person, who does the same, and then we all look on in silent disappointment when the waiter takes it away. Now imagine if someone called out Bob for devouring four of the six cheese sticks, among a group of five. Well, Windows 10 is going to do that with apps like Chrome when they drain your system's resources.
It is only fair, and also potentially useful, to keep your PC running in tip-top shape. And it is coming to a future version of 'Apps & features' settings in Windows 10. This setting already displays certain vitals, but a new app manager will be added to it, to give users more information about running apps and control over their behavior.
This is being tested as a new settings page, as spotted by Aggiornamenti Lumia on Twitter (via Windows Latest). You can actually try it out now, as pointed out by WalkingCat in a reply, who linked to the AppManager app in the Microsoft Store.
"AppManager allows users to manage their installed applications, provides diagnostic information for these applications, and notifies users when an application could be slowing down their system. Please note: this is an early release of a prototype app, and it is not intended for broad use," Microsoft explains.
The app provides a broad overview of your apps and settings, separated into two columns: All and Running. You can force-close an app or uninstall it altogether, though most interesting is a 'Performance' option that lets you view system stats for a particular app, similar to the Task Manager but in graph form.
Where it really diverges from the Task Manager, however, is by sending notifications. For example, you might get a message that reads, "Google Chrome is slowing down your system. You should consider closing this app."
That could come in especially handy for apps that are less known to be resource hogs, and could perhaps prevent your PC from degrading to a mysteriously sluggish state. It's not a game changer—it's pretty easy to sleuth slower-than-usual performance—but would be a welcome addition to Windows 10 nonetheless, particularly for less savvy users.