If you need to check the integrity if your file system using the built-in Check Disk utility in Windows 10, be advised that some users are reporting issues with it, when attaching the "/f" parameter, which tells the utility to fix errors on the disk. The problem seems to only be affecting solid state drives (SSDs).
For those of you who have never heard of the Check Disk utility, it dates back several decades and was something us old fogies ran on many occasions. These days Windows does a much better of job of taking care of disk maintenance on its own, though there are still instances when IT admins and tech savvy users might want to run the command, which is initiated by typing "chkdsk" in a command prompt, followed any number of optional parameters.
However, there are reports of the Check Disk utility mucking up the file system when run on a PC with an SSD installed, in Windows 10 20H2. One of the authors at Planet3DNow say they ran the utility with the /f parameter, which prompts a system reboot so that it can be initiated on startup, only to run into a blue screen of death error. 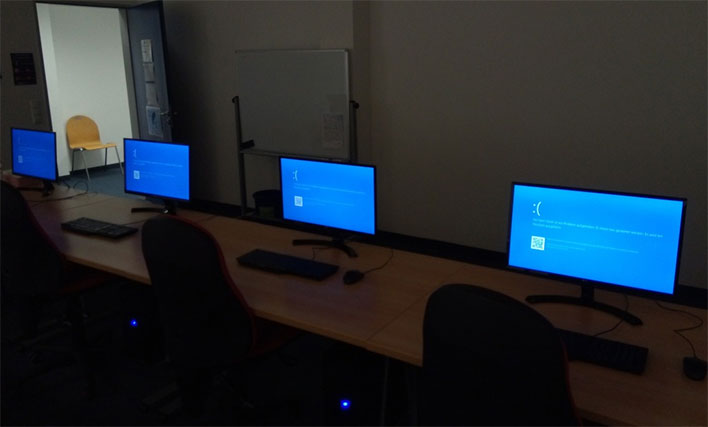 "This is not an isolated case. It is also not due to the hardware used by the PCs, because it can also be reproduced in a VM on a completely different system," the author wrote (via Google Translate).
It is not clear why this is happening, but according to the author, if installing Windows 10 64-bit and updating to 2020-12, then running the "chkdsk c: /f" command in a command prompt as an administrator, the system will hang with a blue screen and damage the file system. An automatic or manual repair is then required, depending on how the system is set up, in order to get the PC to boot properly again.

In a related forum post, some users were able to run the command without issue, while others ran into the same problem. The blue screen error messaged displayed is NTFS_FILE_SYSTEM, which then renders the system unable to boot (for those affected). it appears to be related to KB4592438, though Microsoft does not list this symptom as a known issue.
Have you run into this issue? Let us know in the comments section below. For everyone else, you may want to hold off on running the Check Disk utility for a bit, until there is more clarity on the situation.
EDIT: This article originally conflated the /r and /f commands. To clarify, the /f parameter is intended to fix errors on a disk, while /r locates bad sectors and recovers readable information, and includes the functionality of /f (without having to specify it separately). Users who are reporting problems (BSODs) claim it happens with the /f parameter, though in theory, it could happen with /r as well.