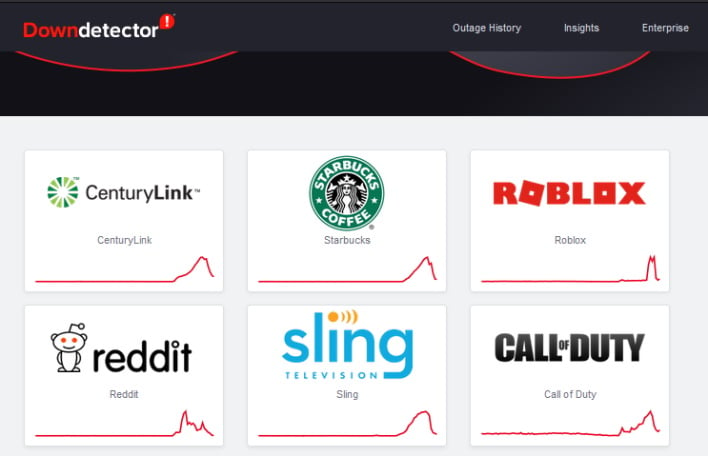 Update (8/31/2020): It is now coming out that "misconfiguration at a major external network provider" led to the issues.  The article has been updated to reflect this.

As it goes, if something is not supposed to break, it probably will.  This morning, some people had trouble getting to websites across the internet. DownDetector showed a large spike in people reporting issues, and it appears it all came down to a problem with an external network provider.

Around 6:30am CST, a rather large spike in issues began to crop up across the web, from Starbucks to Call of Duty multiplayer sessions. Video streaming, log-in services, and whole websites themselves were having problems. For the users who could access Twitter, reddit, and other social media sites, fingers started to point at Cloudflare.

If we look at Cloudflare’s status website, they showed an error log this morning around 5:30am CST, well before the outages started to spike. On the status log, they said that, “Cloudflare is aware of, and investigating an issue which potentially impacts multiple customers.” After a few hours, the issue was identified as a “transit provider which is causing 5xx class HTTP errors, such as HTTP 522, 502, 503.” Since the issue was identified (and not Cloudflare's fault), internet traffic was rerouted around the issue. Now, a fix has seemingly been implemented and Cloudflare is monitoring the whole situation. Internet “reachability” is improving, and the problem appears to be mostly mitigated.

DNS provider and service issues can happen from time to time, and this isn’t the first time this year Cloudflare encountered trouble. Services or servers are bound to break or get attacked, as they have with other DDoS attacks. Hopefully, the outages and attacks can be taken care of swiftly, such as today. Many users did not experience widespread issues, so things seemingly were handled well. In any case, were you affected by this issue at all this morning, or were you still asleep when the outage took place? Let us know in the comments below.