It's been a long and frustrating road back to widespread GPU availability at prices anywhere close to MSRP, and at this point, we're all clamoring for AMD and NVIDIA to release their next-gen graphics cards. Those are coming, though exactly when still remains to be seen. Related, there are rumors that NVIDIA may end up delaying its GeForce RTX 40 series.
The knee-jerk reaction is to be frustrated at such news, if it ends up being right. Gauging the veracity of such rumors is challenging because, officially, NVIDIA has not said precisely when its next-gen models based on Ada Lovelace will arrive. We can only go by leaks and speculation, and of course you always have take those with a level of inherent skepticism.
So what are these rumors, exactly? There's been chatter that NVIDIA and its partners are dealing with an oversupply of GeForce RTX 30 series (Ampere) cards. For a long while, these were in short supply to gamers—the pandemic, demand from miners (and their bots), and scalpers created a perform storm of manure for gamers to get their hands on one without paying through the nose.
Recent factors like the crypto crash have flipped the market on its head, and suddenly GPUs are in stock and priced close to (and sometimes lower than) MSRP. Miners are also flooding the market with used GPUs as they move on from the crypto game. Whether you're actually interested in buying a card that's been running 24/7 in a mining rig is another story, but the point is, it's a much different situation now. 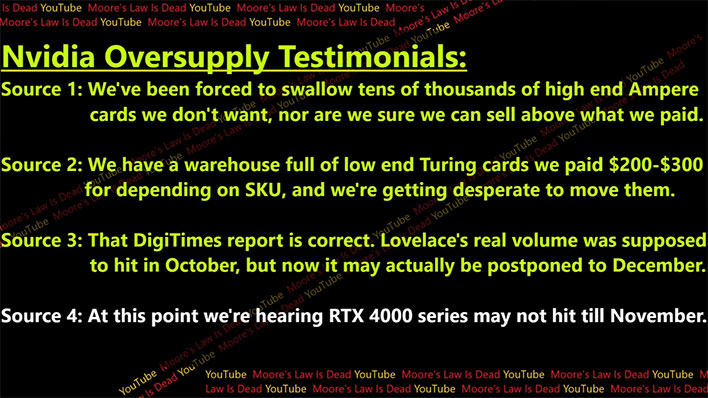 We've heard rumors of a delay before, but apparently the situation is pretty dire for NVIDIA's hardware partners, according to YouTuber Moore's Law Is Dead. His sources indicate that some companies are sitting on piles of current-generation and previous-generation graphics cards, and that they're desperate to move them. In some case (maybe many cases), they're looking at taking a loss versus what they paid.
He also says volume shipments of next-gen Ada Lovelace has been pushed from October to December, and the retail launch might not take place until November, according to his sources. Furthermore, that could mean it might be around a year from now until mid-range GeForce RTX 40 series cards are available.
If looking at this through a glass that's half full, this could benefit gamers by continued price drops on Ampere, with steep discounts in tow. Supposing companies really are desperate to move existing stockpiles at a loss, it's conceivable that cards selling for less than MSRP will become the norm and not the exception. Sure, we'd all love to see next-gen GPUs on shelves already. But in the meantime, we'll certainly welcome lower priced cards on what's out now.