Yesterday, we reported on the subreddit /r/WallStreetBets that was effectively gaming the stock market and driving shares of GameStop stock to the moon. Today, it seems as though the crazy train just is not ending. The crowdsourced stock-mob has now driven (NYSE:GME) up approximately 129%, to around $350, at the time of publication. Who is behind the madness, and what is to come in the following days?


The answer to the first part of the question is easy, the people behind the wildly growing reddit community, /r/WallStreetBets. They are a group of individual investors self-described as “degenerates,” but are now a crowdsourced stock-mob. Since the GME stock took off, Wall Street and mainstream media took notice and have supposedly been treating /r/WallStreetBets like “degenerates,” but that move just angered the mob, making the shenanigans and the reddit posts continue.

One user, /u/RADIO02118 created “An Open Letter To CNBC,” on the subreddit. Essentially, it expresses anger over the way Wall Street works and how the big players do not understand the struggle and position of the individual. The letter has over 19,000 upvotes and over 100 post-awards. To be honest, they are not entirely wrong though, as the subreddit is being demonized somewhat. 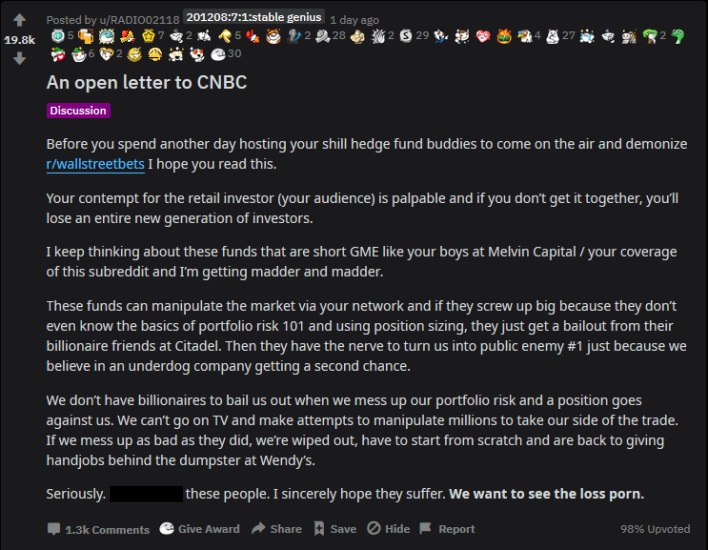 Another post takes the media attacks and Wall Street madness more personally. The user, u/benaffleks, explains that the old institutions fear the future where anyone can get in and make money rather than needing a stock manager. This post has over 22,000 upvotes and over 100 awards as well, showing that many tend to agree. 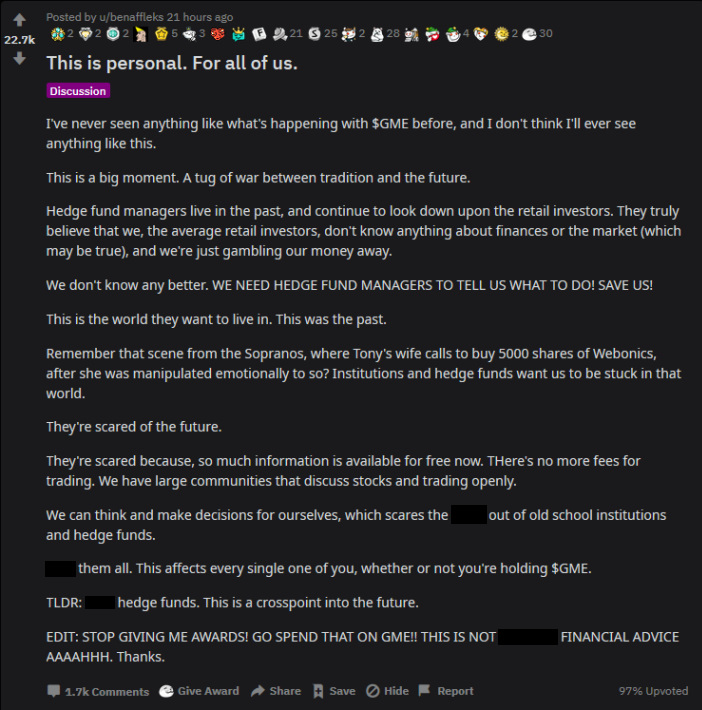 Besides the craziness occurring in /r/WallStreetBets, be it good or bad, the stock manipulation is starting to leak out to the internet beyond reddit. Even Elon Musk got in on the chaos after tweeting out about /r/WallStreetBets, and we are beginning to see CNN and other outlets cover what is happening as well. Where will this coverage take us after the dust has settled?

GME is likely no longer as enticing of a buy at this point, but /r/WallStreetBets is setting its sights on other stocks like AMC. The movie-theater company stock is up 182% to $13.96 and climbing. If this stock takes off even further, more people will have their eyes on the subreddit, and things will grow exponentially as people want in on the gains. On the contrary, we could see /r/WallStreetBets “pump and dump” stocks in unison just to mess with individuals and companies.

Overall, it will be an interesting and awesome couple of days (and weeks) on the stock market. No one can really predict what will happen in the coming days because it all comes down to the mob-mentality that is happening at /r/WallStreetBets. We could see stocks like BlackBerry, Bed, Bath & Beyond, and Nokia begin to take off as they have been mentioned on reddit. Ultimately, keep an eye on HotHardware for updates on the madness happening on the stock market.