We are now into the fifth week of Aquaman challenges in Fortnite, the hugely popular battle royale that is a veritable cash cow for Epic Games. Each week's challenge has offered players a chance to claim a themed award, like the Supreme Shell Back Bling from last week. For this latest challenge, if completed, you can claim Aquaman's trusty Trident and make it your pickaxe.
It is a relatively simple challenge in the grand scheme things—you just need to locate the Trident at Coral Cove. However, it can be in one of three different specific places. They are relatively near each other, though, so there is not too much treasure hunting involved. So, where exactly do you need to go in order to claim the Trident?
Let's start with heading to Coral Cove. This is found in the northwest section of the map, above and to the left of Sweaty Sands. Use this map for reference... 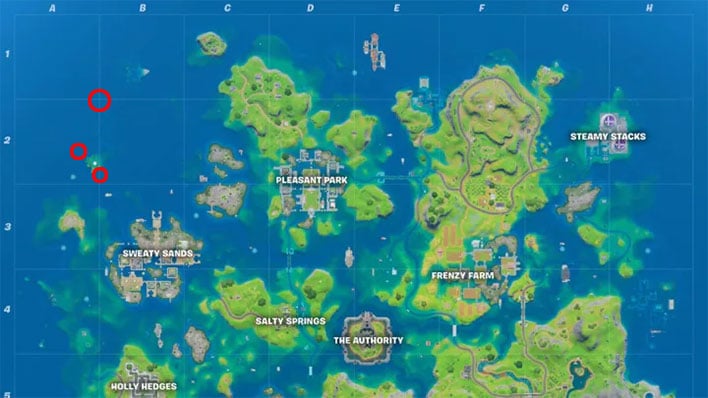 Those three circles are roughly where you can find the Trident. The island in between them all is Coral Cove, a new point of interest when the map was flooded, and what you are hunting for are rock formations, as circled above.
One thing to keep in mind is that you can expect to run into lots of other players, because of this week's challenge. So, heads up.
To complete the challenge, you only need to locate and collect one of them. Once you locate a Trident, just hold down the Use button ("E" by default). It takes a bit to complete the action, and if there other players nearby (which there probably will be), things can get dicey. However, this is a necessary item if you want to unlock Aquaman's skin (as well as the previous challenges).

If you want a video walkthrough of the above locations, InTheLittleWood has put together a nifty 2min28sec video that is worth checking out.
No need to stop at collecting the Trident and unlocking the Aquaman skin, though.
"After unlocking the Aquaman Outfit, he’ll have another stop on his waterborne tour for you. While wearing the Outfit, dive over the waterfall at Gorgeous Gorge and unlock the Outfit’s Arthur Curry style (a stylish splash down)," Epic Games says.
In other words, you can unlock a shirtless version of the Jason Momoa-inspired Aquaman character. Just hop in the water at Gorgeous Gorge, swim towards the waterfall, and jump to complete the challenge.