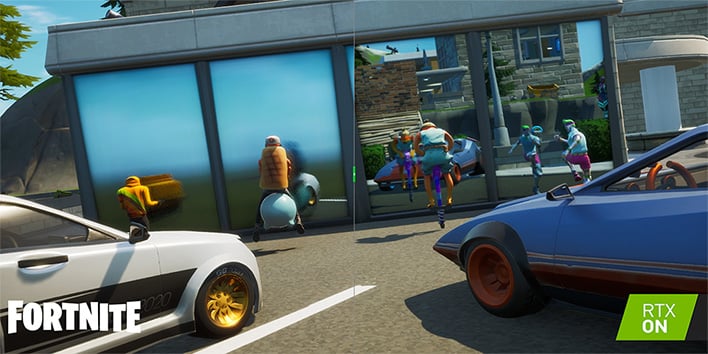 In just a couple of days from now, NVIDIA will kick off the Ampere era in the consumer sector with the first of its recently introduced GeForce RTX 30 series, the GeForce RTX 3080 ($699), followed by the GeForce RTX 3090 on September 24 ($1,499) and GeForce RTX 3070 on October 15 ($499). I can't imagine the motivating factor in purchasing these cards is to push more frames in Fortnite, as its cartoon style graphics is not all that demanding. However, the popular battle royale is gaining some RTX goodies this week as well.
We knew this was coming, because NVIDIA revealed as much during its GeForce RTX 30 series announcement. But now we know exactly when, along with a few other details. So enough with the suspense—Fortnite is getting a major RTX upgrade on September 17, the same day the GeForce RTX 3080 will make its retail debut.
So what does that mean? Prettier graphics, for one. Take a look at the image at the top of this article. The left half is Fortnite as you know it, and the right half is with RTX turned on. It is still very much cartoon-like in its visual style, but also more grown up, with some nice reflections and shadows.

The three main ingredients of the upcoming overhaul include ray tracing visuals, DLSS support, and Reflex. There will also be a brand new custom RTX map, developed by Epic Games in partnership with NVIDIA, to take advantage of and showcase the visual goodies that RTX makes possible.
"Immersive ray-traced effects, powered by GeForce RTX’s RT Cores, dramatically improve the fidelity and detail of Fortnite’s stylized world. With NVIDIA DLSS, performance is greatly accelerated thanks to Tensor Cores, found exclusively on GeForce RTX 20 and 30 series GPUs. And NVIDIA Reflex reduces the time it takes for your actions, like your character’s movements, to be displayed on your monitor, increasing responsiveness," NVIDIA says. 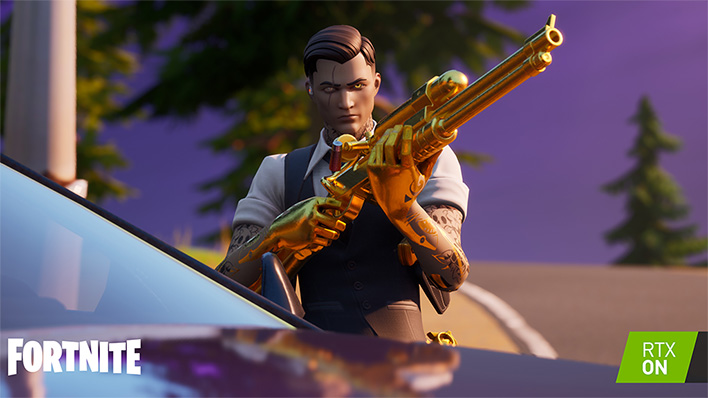 As for the ray-traced goodies, gamers can expect several different effects, including "super accurate reflections" in water and other reflective surfaces, dynamic shadows that stretch across the screen and soften along the way, ambient occlusion (more accurate shadows with objects and surfaces meet), and global illumination (additional bounced light).
It's basically a smorgasbord of visual upgrades, further aided by performance enhancements with DLSS support and Reflex.


"NVIDIA Reflex is a revolutionary suite of technologies that measure and optimize system latency in competitive games, making gameplay more responsive. With lower latency, you can acquire targets faster, react quicker, and improve your aim," NVIDIA explains.
Enabling RTX features will obviously require a GeForce RTX graphics card (20 or 30 series). There will also be a GeForce driver update available later this week, that ties into this. In addition, NVIDIA says Fortnite RTX is headed to its GeForce NOW game streaming service sometime in the weeks ahead. Good stuff.