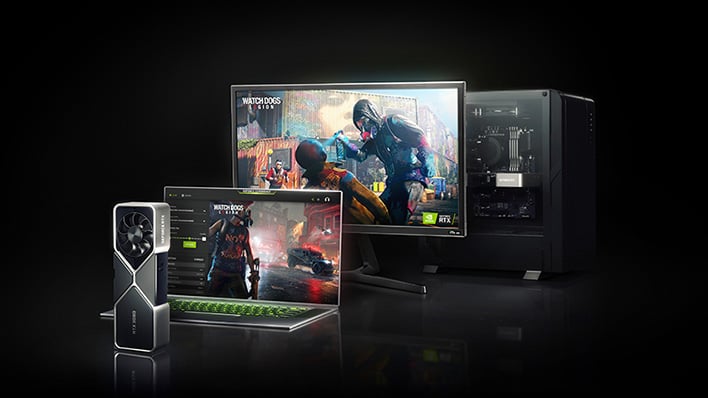 The prevailing fear leading up to the launch of NVIDIA's GeForce RTX 30 series was that pricing would get jacked way up, so it was a pleasant surprise to see the GeForce RTX 3070 debut at $499, with NVIDIA claiming it bests a GeForce RTX 2080 Ti. On top of that, NVIDIA has announced a GeForce RTX 30 series bundle with some nice extras.
Yes, "extras," as in plural. There are precisely two—for a limited time, NVIDIA is gifting a digital download code for Watch Dogs: Legion and including a full year of a GeForce NOW Founders membership to people who purchase a qualifying GeForce RTX 30 series.
Watch Dogs: Legion is not out yet, but is slated to release on October 29, 2020. Pricing starts at $59.99 for the Standard Edition (the version NVIDIA is bundling). GeForce NOW, meanwhile, runs $4.99 per month for the Founders tier, so that's another $59 (and change) perk. So, you're looking at about $120 worth of extras.
As for the GPUs, the GeForce RTX 3070 Founders Edition runs $499, the GeForce RTX 3080 Founders Edition runs $699, and the GeForce RTX 3090 Founders Edition costs $1,499. The latter is obviously on the pricey side, but it's basically this generation's RTX Titan. Hence why NVIDIA is pitching the GeForce RTX 3080 as its flagship consumer GPU.
The GeForce RTX 3080 will be the first SKU available, starting on September 17. The GeForce RTX 3090 will follow on September 24, then the GeForce RTX 3070 will release sometime in October. As such, this bundle offer goes into effect September 17 and runs through October 29, or until supplies last.
As with many of NVIDIA's past bundle offers, this one applies both to standalone GPU purchases and pre-built desktops with a qualifying GPU. Just be sure to purchase from a participating vendor, a list of which will presumably be made available in a couple of weeks. In the meantime, you can check out the Redemption FAQ and the Terms and Conditions for more info.