Popular messaging app WhatsApp catches up to Slack and Telegram with a new feature that users have been asking for. The Meta-owned platform is now offering a way to message oneself.

Some may not see the need for the ability to send a message to yourself. After all, aren't messaging apps meant to carry on conversations with two or more people? However, the ability to message oneself can be very handy. If you have ever had an idea pop into your head out of nowhere and nothing to write it down on, you may have eventually forgotten what you thought about altogether. However, if you were to have sent a quick message to yourself in the moment, you would have been able to see the message later as a reminder. Now, WhatsApp has caught up to other platforms by adding a feature that allows you to do just that.

WhatsApp began testing a new way to begin a conversation with yourself back in October. WABetaInfo reported that the feature is currently rolling out on iOS with version 22.23.74 of the app. Some Android users are also finding the new feature for the app on their devices after updating to version 2.22.23.77. 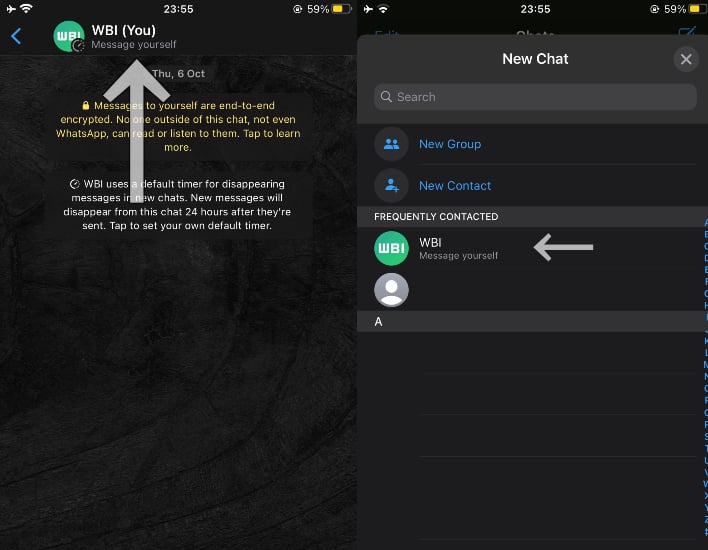 So, how do you use the new feature? First, you will want to find your personal contact information, which should be visible within the contacts list in the app. Once you have found yourself, you will simply send a message just like you would to anyone else in your contacts list.

Also, a different chat caption shows up when opening a chat to yourself, aptly identified as "Message yourself". It should be noted that any messages that are visible in this particular chat will be visible across all your linked devices, while remaining end-to-end encrypted.

Not all users will see the update right away. WhatsApp states that the new version has been released to some users of the app from the App Store and TestFlight, with the changes rolling out to more users over the coming days.