The green versus blue bubble battle has been ongoing, with Google calling out Apple, requesting the company implement Rich Communication Services (RCS) to ‘fix texting woes.’ However, it seems Google is now making an even bigger leap to help foster text messaging interoperability with its latest update to Messages by Google.

Google did not take too kindly to Tim Cook trolling the company by saying, “buy your mom an iPhone,” rather than addressing RCS concerns. Subsequently, the Mountain View-based company has rolled out an update to Messages by Google to “give everyone a secure and modern messaging experience” and “improve messaging between Android and iOS.” The first of these changes is the ability to reply to an individual message in a conversation with RCS enabled. This means you can touch on an individual topic rather than sending a wall of text to talk about a specific thing in a longer text conversation. 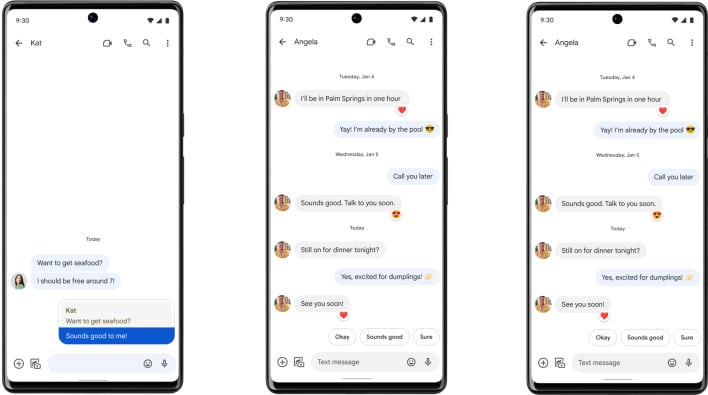 Another big addition is the ability to react to SMS texts from iPhone users with emojis, so you can like, heart, and question messages to your heart’s content. This follows an earlier feature with which Google started displaying emoji reactions from iPhone users on Android. Outside of this, Google is improving voice messages, adding reminders in Messages, embedding YouTube videos, and more. Also, Google is now partnered with United Airlines, so when RCS is enabled, you will have free messaging available on WiFi-equipped flights.

Finally, besides all the in-app changes, Google is updating the icons for the Contacts, Phone, and Messages apps, which will share the same look and match the Material You themes for personal flair. All told, Google is putting quite a bit of work into its Messages app and is seemingly trying to get Apple to play ball, so the bubble battles can finally be put to rest.
It is now up to Apple to really bury the hatchet of course, but that may be all just wishful thinking.