A desktop version of the popular, Meta-owned messaging application WhatsApp has just been released.

Currently only available for Microsoft Windows, the desktop application appears to be an encapsulated version of the web app that runs as a standalone utility. All of the features you'd expect are available, and it even includes theme matching, which will configure the interface to match your Windows theme. If, for example, you're using a dark theme, WhatsApp will do the same, and vice versa if you're using a light theme.

For users of WhatsApp the interface will look almost identical to their existing mobile or web experiences. According to the information posted by the parent company, the new desktop application should have increased reliability and speed, and the capability to receive notifications and messages regardless of whether or not your phone is powered on and logged in.

The company also intends to release a Mac edition of the desktop application. Mac users can enroll in an early access and beta program via the Apple TestFlight platform. Opting in to TestFlight is somewhat of an involved process, however. So, if you don't want to jump through any hoops WhatsApp encourages you to continue to use the Web app. Using TestFlight as an early access platform is indication that a working build for the Apple operating system exists though, which means it may not be much longer until a public release is available. 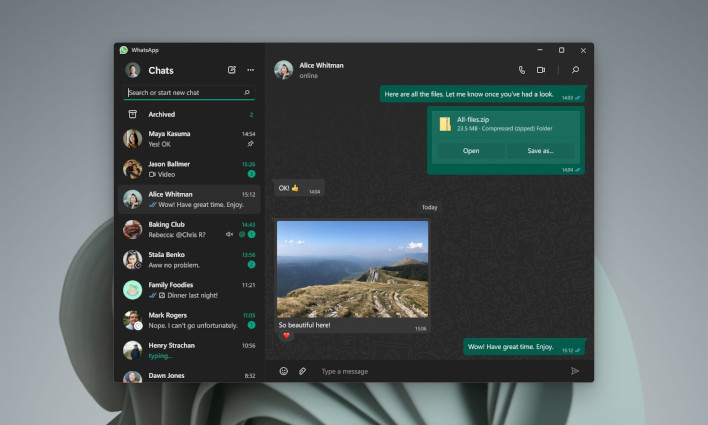 If you are a Windows user, though, you can head to the download page, or just search the Microsoft Store to grab the desktop edition of WhatsApp.