Western Digital Announces BiCS5 112-Layer 3D NAND Up To 1.33 Terabits Per Chip For Next Gen SSDs 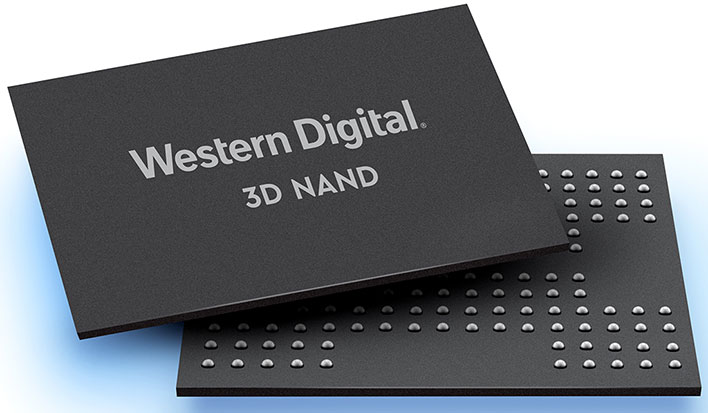 Western Digital is one of the biggest names in storage, and today the company announced it has developed its 5th generation 3D NAND flash memory technology called BiCS5. It is latterly denser than the previous generation of 3D NAND, and also offers more storage layers—112 of them, to be precise.
These are important traits because they ensure companies can continue to crank out more capacious storage drives. There is also a performance benefit. According to Western Digital, its 112-layer BiCS5 3D NAND flash memory offers 40 percent more bits per wafer and up to 50 percent more input-output (I/O) performance than its previous generation 96-layer BiCS4 memory.
"As we move into the next decade, a new approach to 3D NAND scaling is critical to continuing to meet the demands of the rising volume and velocity of data," said Dr. Steve Paak, senior vice president of memory technology and manufacturing at Western Digital. "Our successful production of BiCS5 is an illustration of Western Digital's ongoing leadership in flash memory technology and strong execution to our roadmap. By leveraging new advancements to our multi-tier memory hole technology to increase density laterally as well as adding more storage layers, we have significantly scaled the capacity and performance of our 3D NAND technology, while continuing to deliver the reliability and cost which our customers expect."
Western Digital is able to keep costs in check because BiCS5 is built on triple-level cell (TLC) and quad-level cell (QLC) technologies, which are comparatively affordable to single-level cell (SLC) and multi-level cell (MLC) flash memory solutions.
Advancements in lateral scaling technology played a big role in getting BiCS5 out the door. Part of that entails utilizing second-generation multi-tier memory hole technology, though Western Digital also credits improved engineering processes and other 3D NAND cell enhancements as being key in significantly increasing lateral density across the wafer. This all came together as part of a joint effort with Kioxia, a company that was spun out of Toshiba.

Western Digital has started producing 512 gigabit (Gb) BiCS5 TLC memory chips and is already shipping consumer products built on the new technology. Looking further out, the company says mass production will be kick off in the second half of the year. Clients (storage makers) can expect capacities of up to 1.33 terabits (Tb).