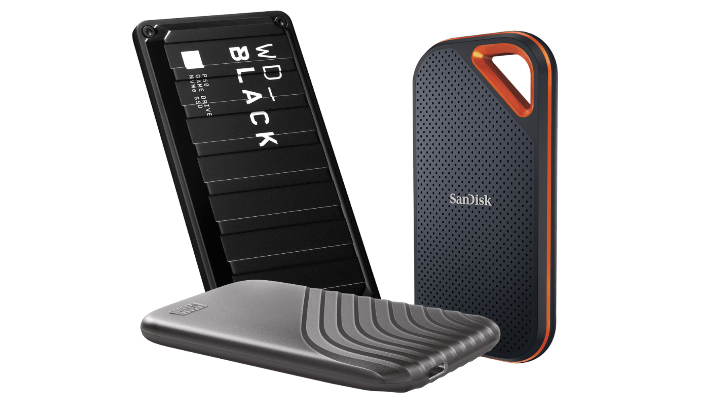 As games continue to grow in size, so too do the storage devices required to store copies of Call of Duty, GTA V, and others. Accordingly, Western Digital has announced a size increase for its consumer brand portable SSDs at CES 2021. These new 4TB drives will become available this quarter. but will cost consumers a pretty penny if they want one.

The SanDisk Extreme Pro SSD is NVMe powered storage and is one of the fastest in the bunch at 2000MB/s read and write. It features a “forged aluminum chassis” to act as a heatsink for the drive and a USB 3.1 Type C connection for blazing-fast speeds. The models which are available now come with a 5-year warranty and a silicone shell for protection. The drive's 4TB variant will cost $749.99, but the currently available 2TB drive is on sale for $349.99, which is 31% off the regular price.

The SanDisk Extreme portable SSD is another external storage device with read speeds around 1050MB/s and writes up to 1000MB/s. Both Extreme drives from SanDisk have the same aluminum case and silicone shell as well. Furthermore, as the Extreme name suggests, the drives can be used in an “extreme” way, with two-meter drop protection and IP55 water and dust resistance. The non-pro 4TB variant of the SanDisk Extreme line will cost $699.99, but you can get the 2TB model for $289.99, which is 37% off.

The P50 Game drive is a robust-looking drive with a gaming type aesthetic with a black forged aluminum shell. This drive also features up to 2000MB/s read speeds and likely similar write speeds, but official numbers for write were nowhere to be found. It comes with a USB-C to USB-C cable and a USB-C to USB-A cable should you need it, but you will end up with better performance if you use the former over the latter. The 4TB of the game drive will be available at an estimated $749.99, but you can get the 2TB model on Amazon for 30% off at $349.99.

This drive is built for business, not games. It features read speeds of 1050MB/s and write speeds of 1000MB/s and comes with password protection and hardware encryption to keep your files secure. It has a USB-C connector for connectivity, but it is backward compatible with other USB standards if you have an adapter. The 4TB model will cost an estimated $679.99, but you can get the 2TB drive on Amazon for 30% off at $269.99.

Overall, if you need portable storage, Western Digital is a solid brand. If you are interested, keep an eye on HotHardware as perhaps we will get some of these drives in-house later this quarter.