NASA's Mars Perseverance rover has been busy collecting rock-core samples in an area thought by scientists to be ideal for finding ancient signs of microbial life on Mars. The rover has also been taking some extraordinary pictures along the way.

Perseverance is in its second science campaign, following a 31-Martian-day (or sol) dash across approximately 3 miles (5 kilometers) of Mars. The journey took Perseverance to the "doorstep of Jezero Crater's ancient river delta" on April 13. Since arriving, the rover has been collecting rock-core samples and capturing highly detailed imagery.

"We picked the Jezero Crater for Perseverance to explore because we thought it had the best chance of providing scientifically excellent samples - and now we know we sent the rover to the right location," remarked Thomas Zurbuchen, NASA's Associate Administrator for Science in Washington. "These first two science campaigns have yielded an amazing diversity of samples to bring back to Earth by the Mars Sample Return Campaign." 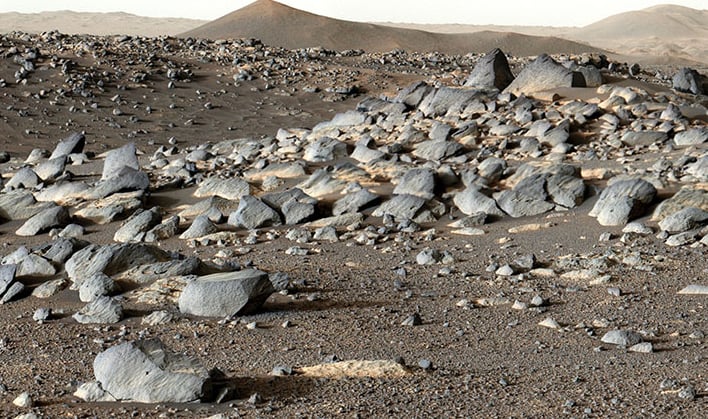 The area that Perseverance is currently investigating, is the twenty-eight mile (45 kilometer) wide Jezero Crater. It is host to a delta, an ancient fan-shaped feature that formed about 3.5 billion years ago at the convergence of a Martian river and a lake, according to NASA. During this trip, Perseverance is taking a closer look at the delta's sedimentary rocks. During its first campaign, it explored the crater's floor, revealing igneous rock which forms deep underground from magma, or during times of volcanic activity at the planet's surface.

So far on its current campaign in the Jezero Crater, the rover has collected four rock-core samples. Scientists are hopeful that they will be able to find signs of ancient life once the samples are returned to Earth. The organic matter that they will be looking for will consist of a wide array of compounds that are primarily made of carbon and typically include hydrogen and oxygen atoms. Other elements that will be sought include nitrogen, phosphorous, and sulfur. The reason these particular molecules are being sought out, while not requiring life to exist, are because they are the chemical building blocks of life.


As Perseverance made its way into Jezero Crater, it took a moment to send back an incredibly detailed panorama. It is the most detailed view ever returned from the Red Planet, consisting of 2.5 billion pixels and generated from 1,118 individual Mastercam-Z images. You can take in this astonishing view in the video above.

"In the distant past, the sand, mud, and salts that now make up the Wildcat Ridge sample were deposited under conditions where life could potentially have thrived," explained Ken Farley of Caltech in Pasadena, California. "The fact the organic matter was found in such a sedimentary rock - known for preserving fossils of ancient life here on Earth - is important. However, as capable as our instruments aboard Perseverance are, further conclusions regarding what is contained in the Wildcat Ridge sample will have to wait until it is returned to Earth for in-depth study as part of the agency's Mars Sample Return campaign."