NASA's DART mission launched early this morning as it travels through space in order to slam into an asteroid. The hope is that the data collected will provide scientists with an answer on how to avert an Armageddon type event in the future.

Humankind has pondered the thoughts of what a large asteroid slamming into the Earth would be like. Movies have been based on the idea and presented methods that don't really seem plausible. Scientists have theorized that an asteroid could have been what caused the extinction of the dinosaurs millions of years ago. With all of that in mind NASA has set out to seek answers and hopefully provide logical and effective methods of averting total annihilation.

At 1:21am ET at Vandenberg Space Force Base in California, Double Asteroid Redirection Test (DART) took flight on a SpaceX Falcon 9 rocket. Its goal is to impact an asteroid called Dimorphos that orbits the larger asteroid Didymos. Dimorphos was chosen as its target due to how far away the asteroid is from Earth and that it does not present any danger once the satellite crashes into it at a speed of around 15,000 miles per hour. However, the target is still close enough that it will allow scientists to measure any change in the orbital path of Dimorphos.

DART is just one aspect of NASA's larger planetary defense strategy and was built and is managed by the Johns Hopkins Applied Physics Laboratory in Laurel, Maryland. NASA Administrator Bill Nelson stated, "DART is turning science fiction into science fact and is a testament to NASA's innovation for the benefits of all. In addition to all the ways NASA studies our universe and our home planet, we're also working to protect that home, and this test will help prove out one viable way to protect our planet from a hazardous asteroid should one ever be discovered that is headed toward Earth."

Around 2:17am ET DART separated itself from the second stage of the Falcon 9 rocket. A few minutes later, scientists began receiving telemetry data and starting orienting the spacecraft for a safe deployment of its solar arrays. It took about two hours after that for the 28-foot long solar arrays to fully extend. DART will take about one year to reach its destination for impact presumably between September 26 and October 1, 2022.

The Didymos system is an eclipsing binary, which means that the orbiting Dimorphos passes in front of and behind Didymos. This will allow researchers to measure the variation in brightness of the combined system to determine the orbital path of Dimporphos before and after impact. Any effect DART has on the orbital path of Dimorphos will be able to be tracked and documented. The impact will be minimal in that it should not disrupt the asteroid, but still be enough so scientists can measure the slightest of changes in its orbit. 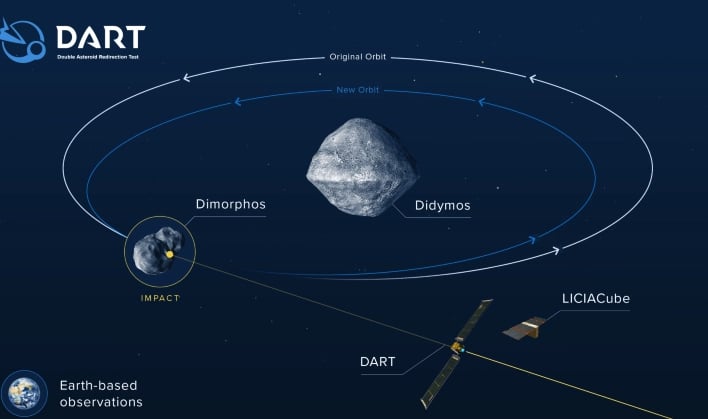 "We have not yet found any significant asteroid impact threat to Earth, but we continue to search for that sizable population we know is still to be found. Our goal is to find any possible impact, years to decades in advance, so it can be deflected with a capability like DART that is possible with the technology we currently have," stated Lindley Johnson, planetary defense officer at NASA headquarters.
Lindley further indicated that NASA is also researching and preparing the Near-Earth Object Surveyor Mission, which is a space-based infrared telescope that is slated to launch later this decade.

As humankind continues to look up to the sky in hopes they do not see a massive flaming rock hurtling toward Earth, we can all rest a bit easier in knowing that NASA is preparing to avert any such disaster. Once DART's Didymos Reconnaissance and Asteroid Camera for Optical navigation (DRACO) turns on a week from now, we will all be able to view images of its flight through space on its way to history and hopefully have answers on how to save all from any possible future asteroid impacts on Earth.

As a side note, let us know who you would have preferred seeing as the last person on the asteroid in the movie Armageddon. Who should have been tasked with dying as they pushed the detonation button saving planet Earth? Bruce Willis, Ben Affleck, Steve Buscemi, or someone else. Let us know in the comments!