Can it run DOOM? The meme-worthy phrase almost everyone has uttered in the tech space, at one time or another, today is true of this absolutely tiny device. A newly created Adafruit QT Py-powered handheld (which they code-named PINKY) does indeed run DOOM.

With minimal modification to the open-source emulation project Retro-Go the team working on this project was able to load up the shareware DOOM1.WAD almost immediately using its PrBoom functionality. They were also able to confirm getting a headphone jack out working, so you can enjoy that amazing Bobby Prince 1993 soundtrack while blasting away at demons.


The hardware is laid out in their article, but what they were able to get this running on was as follows. 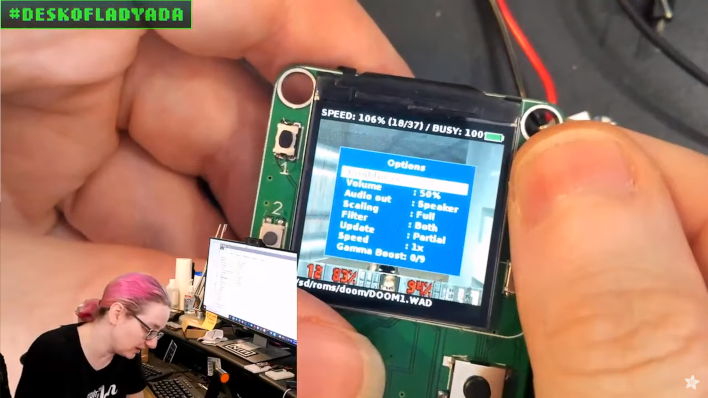 The team is hoping to get a hold of John Carmack and John Romero to get their thoughts on this little device and plan to also send each of them one. According to a video from one of the developers, not only will this device emulate and run DOOM at 100% speed it can do so for Nintendo, Sega Master System, and Game Boy & Game Boy Color or basically just about anything the Retro-Go project (GitHub repository) supports. So maybe we’ll see a Pico-Device GTA V instead of Wi-Fi Streaming to a Game Boy?

Show comments blog comments powered by Disqus
Follow Us:
Your Next PC Platform?