Is it too early to begin thinking about a Steam Deck 2? Not if you're Valve. There's no evidence to suggest the first-gen Steam Deck will be a one-off product and suffer the same fate as the Steam Machine initiative that never really went anywhere. And in fact, Valve is already taking lessons learned from the Steam Deck and applying them to the Steam Deck 2.
That's not to say a Steam Deck 2 is actively in development. But it is probably fair to say there is at least some early planning going on, as Valve takes a pulse of the market with its first-gen console. At minimum, there are discussions taking place.
We know this because Valve's Gabe Newell shared a bit of insight about a next-gen console in an interview with Edge Magazine, and specifically referenced a "Steam Deck 2" product. We don't have the magazine in hand, unfortunately, the but the folks at GamesRadar shared some interesting nuggets from the interview. 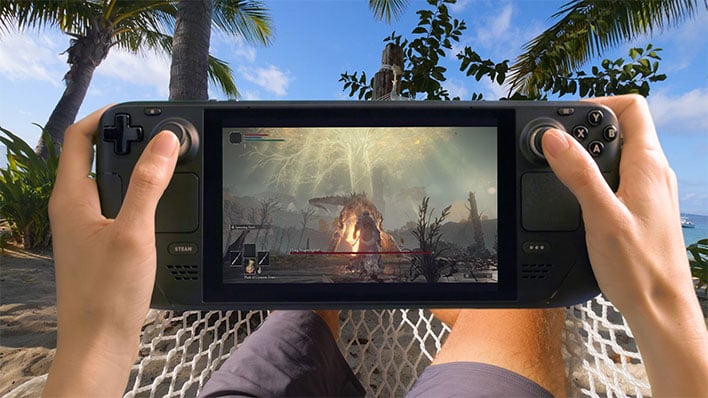 Out of the three Steam Deck models Valve is offering, Newell said the $649.99 model with a 512GB NVMe SSD is proving to be the most popular, and it's not really close. That's the most expensive version, and Newell admits to "being a little surprised" by what this implies, which from his vantage point is that customers are saying they want faster and more capable iterations, and are willing to pay more for those features.
"You know, that's why we always love to get something there and ship it. Because we learn from that, and it helps frame our thinking for Deck 2," Newell said.
We could have told him that gamers are willing to pay more for premium features and burlier hardware, but nobody at Valve asked us. The question is, where's the breaking point? That's what Valve has to figure out, as well as to what extent the graphics card shortage might be driving Steam Deck sales. It's a tough time to try and build or upgrade a gaming PC, which is undoubtedly pushing more sales in the direction of prebuilts and dedicated consoles.
Newell also hinted at the Steam Deck 2 having some unique features. In the same interview, he said the goal for the first-gen Steam Deck was for it have the capability to play all of today's games (check the Steam Deck compatibility tool to see how that's going). Looking ahead to the Steam Deck 2, some of the attention shifts to figuring out "what are the capabilities that mobile gives us, above and beyond what you would get in a traditional desktop or laptop gaming environment?"
He hinted that VR could factor into the equation, though it sounds like that would be further down the roadmap, perhaps for a Steam Deck 3 or later.
You can read the full interview in the April 2022 issue, or catch the snippets at GamesRadar (1 and 2).