Depending on when you ordered your Steam Deck console and just plain old luck of the draw, you could end up with a model configured with a downgraded solid state drive (SSD). Affected units cut the available bandwidth in half, impacting the theoretical maximum data transfer rate. However, Valve says it's no big deal for gaming.
Valve updated the Steam Deck's specifications sometime in May to disclose the two different drive types. It went largely unnoticed until the folks at Hardwareluxx discovered the change, which we've confirmed by taking a quick trip in the Wayback Machine. Here's the listing as it appeared at the beginning of May... 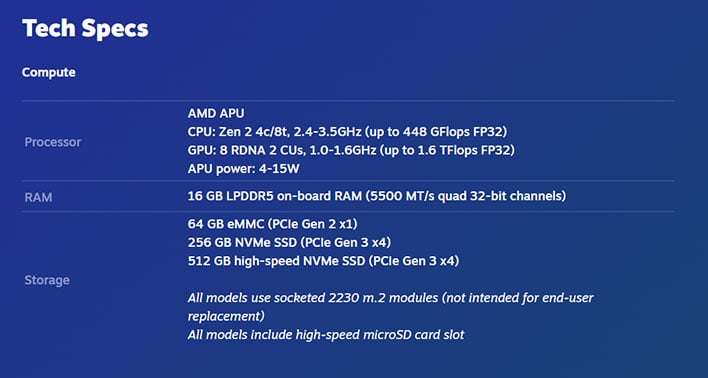 And here's what it says now... 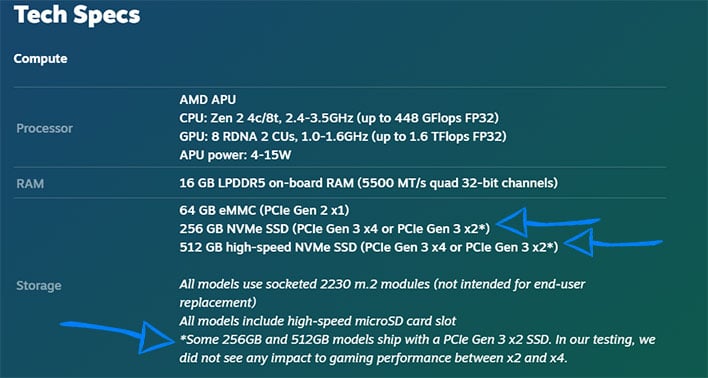 Valve sells three Steam Deck configurations. The least expensive one ($399) comes with 64GB of eMMC storage is not affected by this. The two NVMe SSD models—256GB ($529) and 512GB ($649)—both potentially are affected by the change in specs.
The SSD models employ a socketed M.2 2230 drive, but instead of rolling solo with PCIe Gen 3 x4, Valve now says that some Steam Decks may arrive with a PCIe Gen 3 x4 drive. What does that mean? PCIe Gen 3 x4 serves up around 4GB/s of bandwidth (1GB/s per lane), whereas PCIe Gen 3 x2 cuts the theoretical max bandwidth in half to around 2GB/s.
That's disappointing and it's not clear why the change was made, though Valve claims it "did not see any impact to gaming performance between x2 and x4" in its testing. We have no reason not to take Valve at its word here, because there's still plenty of bandwidth and speed on tap for gaming either way.
What matters more for gaming, as it pertains to storage, is having an SSD instead of an HDD. It matters less what kind of SSD, so long as it's relatively modern. Even a SATA-based SSD is going to perform well, with the fastest models topping out at 'only' around 580MB/s.
We'll see storage speeds matter a bit more down the line when developers start taking advantage of Microsoft's DirectStorage API in Windows. But we're not there yet and the Steam Deck runs on a custom version of Linux anyway (though you can install Windows on it).