The United States military and Microsoft have been working together over the last few years to create a headset with HoloLens technology. They recently provided an update about their contract and the development behind this headset. Microsoft's Integrated Visual Augmentation System headset could be used by the military this coming fall.

The development of the Integrated Visual Augmentation System (IVAS) has largely been based upon feedback from soldiers. Microsoft engineers and other representatives visited a base in North Carolina in 2019. Mark Stephens, the Army’s deputy program manager for the project, commented, “Because Microsoft was a non-traditional defense contractor, we felt like for them to be able to experience what soldiers actually feel and what they go through would help with making some of their technical decisions.”

Microsoft engineers remarked that the experience was “eye-opening.” One redesign featured the removal of a dial. The dial was to be placed on the “compute pack” or “puck” that soldiers would wear on their chest to control the IVAS. However, the dials would frequently break off when the soldiers needed to crawl on the ground. The dials have since been removed. 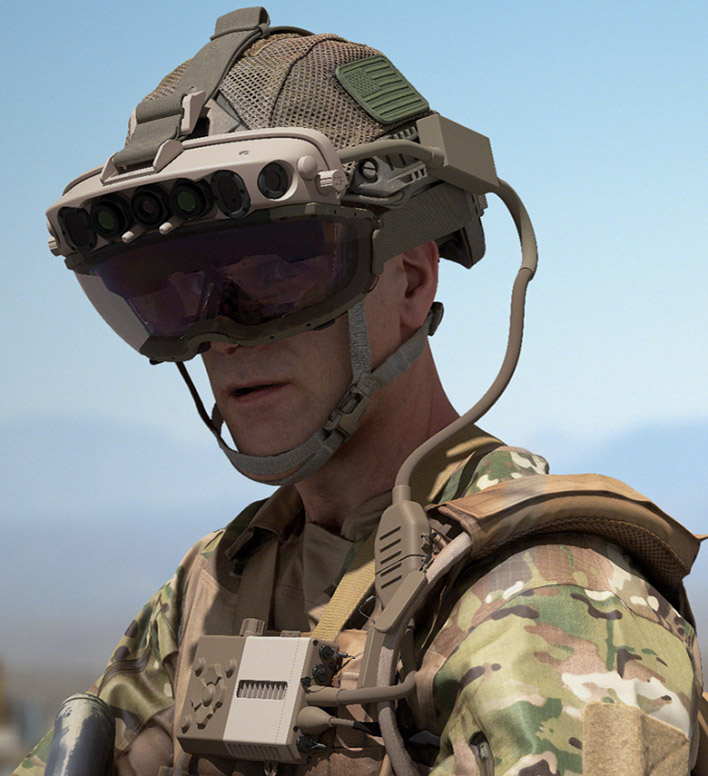 Soldiers have furthermore visited Microsoft’s campus in Redmond, Washington to provide additional feedback about the prototypes. Soldiers have also been testing various prototypes on bases in Virginia, Puerto Rico, and Alaska. This has allowed Microsoft to determine how the device will behave in different climates. Microsoft claims that they have acquired nearly 80,000 hours of feedback from soldiers as of February 2021.

According to Microsoft, the IVAS utilizes “HoloLens’ mixed-reality technology plus thermal imagery, sensors, GPS technology and night vision capabilities.” This combination of technologies provides soldiers with more knowledge of where they are and what is around them in a given situation. This is essential in being able to train for and execute missions. For example, the thermal imagery permits soldiers to see through smoke, while the GPS technology helps them to know where their fellow soldiers are even if it is dark. The ability to project holographic images allows them to better evaluate the terrain, vantage points, and potential entries and exits. David Marra, IVAS program director for Microsoft, noted, “This will have a profound impact on soldier safety and a marked reduction in friendly fire and other types of incidents.”

Microsoft’s IVAS and military contract have received some backlash from Microsoft employees. Several Microsoft employees signed a letter in which they refused to “create technology for warfare and oppression." Microsoft CEO Satya Nadella fired back that Microsoft would not be responsible for keeping back technology from democratic governments like the United States. He stated that this was a “principled decision.” Microsoft appears to be holding to this promise so far.