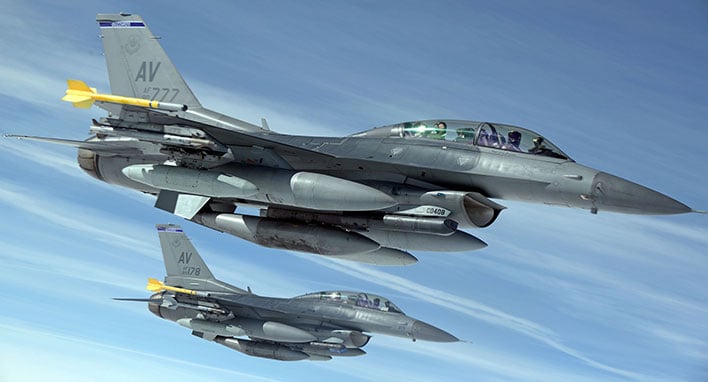 John Henry was a steel driving railroad man who, according to legend, bested a steam-powered rock drilling machine in a competition many, many years ago. I'm reminded of this because it's one of my favorite songs performed by my late grandfather and great uncle, and now decades later, man versus machine is still a relevant topic as the United States Air Force gets read to pit a AI-powered autonomous fighter jet against a human pilot.
Things have changed dramatically since the days of John Henry and steam-powered machines. Artificial intelligence has improved machines by leaps and bounds, and every so often, we are reminded of the potential AI holds. For example, when IBM's Watson beat the greatest Jeopardy contestants of all time (except for James Holzhauer, who had not yet went on his historic run), and more recently when OpenAI bots decimated human players in Dota 2.
While fun examples of AI, the upcoming competition between a fighter drone and human pilot increases the stakes substantially. While nobody will actually be hurt in the competition, it has potential implications for the future of warfare.
Lt. Gen. Jack Shanahan, director of the Pentagon's Joint Artificial Intelligence Center, discussed this in a recent video posted to YouTube by the Mitchell Institute.
Shanahan said that Steven Rogers, a senior scientist at the Air Force Research Laboratory, is aiming to have an autonomous fighter jet ready in July 2021. It will "go up against a manned system in some sort of air-to-air" battle.
"Our human pilots, the really good ones, have a couple thousand hours of experience," Rogers told Inside Defense in 20-18, as spotted by Air Force Magazine. "What happens if I can augment their ability with a system that can have literally millions of hours of training time?… How can I make myself a tactical autopilot so in an air-to-air fight, this system could help make decisions on a timeline that humans can’t even begin to think about?"
Rogers runs the Air Force Research Laboratory's Autonomy Capability Team 3 and has been working on this project for at least a couple of years. What we are likely to see next year, the Rogers hits his goal, is for this technology to be implemented in something an F-16, which is less advanced than more modern jets like the Lockheed F-35.
This will certainly be an interesting competition, if it comes to fruition. Though as Shanahan notes, "there is no level four, fully autonomous vehicle out on the roads today." In other words, the era of self-flying fighter jets getting into real dogfights is still a long ways off.