Yesterday we reported on a Linux kernel developer "banning" the University of Minnesota from providing patches to the kernel. However, this did not come out of the blue as some faculty and students had performed questionable research that wasted Linux kernel maintainers’ time and effort. It appears staff at UMN are now looking into the issue and have taken it quite seriously.

In the last few months, researchers out of the University of Minnesota have been conducting computer science research, leading to multiple papers being published. One of these papers was about the feasibility of introducing vulnerabilities into open-source software, such as the Linux kernel, by sneaking them by reviewers. Effectively, this is human research in a way and likely should not have been carried out in that manner. 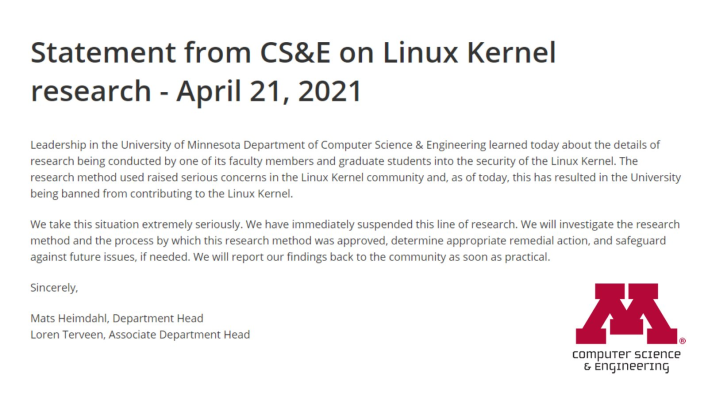 After UMN was “banned” from providing patches to the Linux kernel and had prior patches rolled back, media across the web picked up the story. This seemingly led to the Computer Science and Engineering department team at UMN catching wind of what was going on. Both Mats Heimdahl, department head, and Loren Terveen, associate department head, subsequently published a statement to Twitter, shown above, about the situation.

As many people recognized, this research raised serious ethical and general concerns both in the Linux community and otherwise. Therefore, the department heads have “suspended this line of research” with an investigation to follow that will hopefully prevent something like this from happening again should it be deemed necessary. Moreover, UMN will report its findings to the community when this investigation is complete, so keep an eye on HotHardware for updates soon.