When independent or academic research is carried out, ethics is a primary concern if you have anything to do with people outside the research group. With that in mind, the University of Minnesota has seemingly been performing ethically questionable research on the Linux kernel by submitting useless or vulnerable code. Now, one of the biggest developers of the Linux kernel has banned UMN from submitting patches after becoming fed up with the “research.”

Earlier this year, two researchers from the University of Minnesota published a research paper around the premise of sneaking malicious code into open source software (OSS). The paper specifically targeted the Linux kernel, one of the most prominent OSS projects, and essentially wasted the time of code maintainers to complete the paper.

According to info on the Linux Kernel mailing list, researchers at UMN are now publishing problematic or useless code under the guise of using a “new static analyzer.” While there is no discernible value, either good or bad, it is still another waste of time for people who are legitimately helping the Linux community. Thus, Greg Kroah-Hartman, a major contributor, called out the school in the mailing list shown below and has subsequently “banned” them from submitting contributions to the Linux kernel. 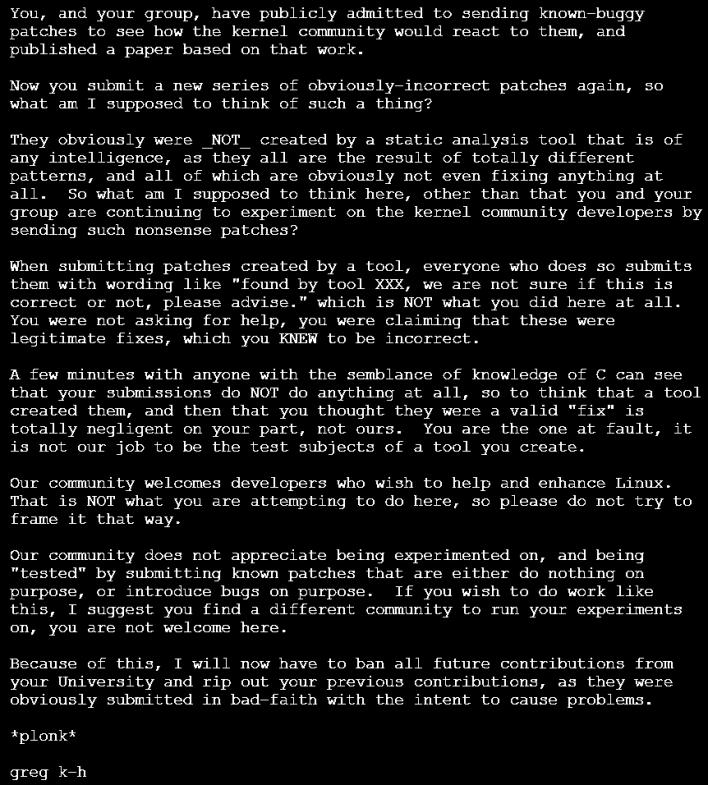 Whether or not the ban will be upheld or even manageable remains to be seen, but a line has clearly been drawn in the sand. Moreover, prior patches from UMN to the Linux kernel will be reverted as there is concern bad faith patches slipped by. Perhaps we will get more information from UMN or the mailing list soon, so stay tuned to HotHardware for updates on this interesting situation.