Do you watch video game livestreams? If so, you probably watch at least some of them on Amazon's Twitch service. You can watch Twitch almost anywhere: desktop and laptop PCs, smartphones and tablets, smart TVs and set-top-boxes, and even on game consoles—if you'd prefer to watch someone else play video games instead of playing them yourself. (As long as you're not in China, anyway.)

That said, one place you couldn't watch Twitch was on the Nintendo Switch. However, now if you want to use your Switch for Twitch, now you can using the new app on the Nintendo eShop. It's free, as expected, and only takes 31 MB of space on your Nintendo console. However, don't get too excited—Twitch on Switch only lets you watch streams, not create them.


That's not actually very surprising given the relatively-meager hardware inside the Switch. While the Tegra X1 SoC that powers Nintendo's handheld is impressively capable, and even includes a fixed-function video encoder capable of 4K resolution at 30 FPS (meaning it surely can handle the Switch's native 720p at 60 FPS), doing so would sap precious memory bandwidth from the game software—a resource that the Switch is direly deficient in. 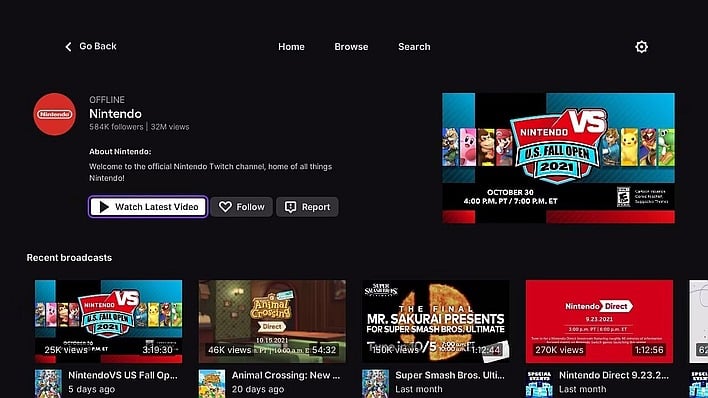 There are other caveats, too. You can't use chat directly on your Switch while watching the stream—you'll have to scan a QR code with your smartphone to do that. Furthermore, using the app automatically opts you into Nielsen's market research software, for those who care about such a thing. The only options mid-stream are to pause and close the stream; as of this writing, you can't even adjust the quality manually.

Still, if you, like this writer, enjoy putting on a livestreamer as background noise while working around the house or preparing meals, this could be a pretty handy solution. You can get the app from the Nintendo eShop.