You can never have too many backups of important data, including photos, videos, secret recipes, spy documents, and whatever else you deem valuable. Apple may not be able to help much with the latter two, but when it comes to all those photos and videos sitting in iCloud, the company has quietly released a new tool that makes it easy (though not necessarily quick) to shuttle copies over to Google Photos.
The silent roll-out is not really surprising—Apple is probably loathe to draw attention to a service that sits outside of its own ecosystem. And that being the case, it is all the more appreciated that Apple would release a tool like this. So, kudos to Cook and the rest of the Cupertino gang.

"You can request to transfer a copy of photos and videos you store in iCloud Photos to Google Photos. Transferring photos and videos from iCloud Photos doesn’t remove or alter the content you store with Apple, but sends a copy of your content to the other service," Apple explains.
Apple also notes that this transfer (or more accurately, backup) takes between three and seven days. It's not clear if the copying of photos and videos over to Google Photos could take less time for smaller libraries, but either way, the time frame is not based on size alone. Apple says it also uses that time to "verify that the request was made by you."
Also note that not everything might get ported over. For example, Smart Albums, Live Photos, and "some RAW files" may not make the trip, Apple says. That said, there is a big range of supported file formats: .jpg, .png, .webp, .gif, some RAW files, .mpg, .mod, .mmv, .tod, .wmv, .asf, .avi, .divx, .mov, .m4v, .3gp, .3g2, .mp4, .m2t, .m2ts, .mts, and .mkv files.
Some other things to note:
Also keep in mind that Google Photos has a limit of 20,000 photos per album. You can still shuttle over albums that are larger than 20,000 photos, the extra pictures and videos will just not be added to the same album.

How To Transfer Apple iCloud Photos To Google Photos

You have to be backing up photos to iCloud in order to use this tool. Apple also requires that you enable two-factor authentication, and of course you will need a Google account to use Google Photos (with enough storage space to complete the transfer).
"If you add more photos or videos to iCloud Photos before your data transfer starts, you’ll need additional space in your Google account to complete it. If your Google account runs out of space during the transfer, not all of your items will be transferred. If you add, update, or delete content after the transfer starts, or if your images and videos are still uploading, these changes or additions might not be included in the transfer," Apple says. 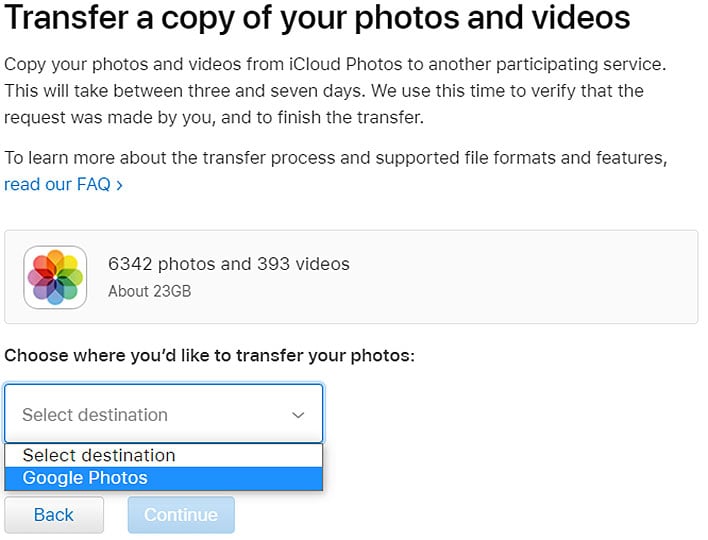 Housekeeping items out of the way, to use the tool, follow these steps...
That's all there is to it! Well, mostly anyway—the service will ask you to sign into your Google account at the beginning. You will receive an email notification when you initiate the transfer, and then another one when it is complete.

If you are not seeing the tool on your account, it is probably because it is not offered in your particular location just yet. For the time being, the tool is available to users in Australia, Canada, the European Union, Iceland, Liechtenstein, New Zealand, Norway, Switzerland, the United Kingdom, and the United States. It sounds like other territories will be added, though Apple did not say which ones or when.