Do you use TikTok? The answer doesn't really matter, because whether you do or don't, TikTok is enjoying enormous growth in viewership. Or put another way, it has "upended the streaming and social landscape" and surpassed YouTube in both the United States and United Kingdom in viewership, in terms of the average monthly time per user, according to a new report.
It's hard to believe, but TikTok is already five years old—a virtually eternity in the fast-moving and ever-evolving tech space, and particularly social media. Owned by Chinese company ByteDance, TikTok is a video sharing app that, speaking from experience, can drain your time if you get caught up watching one video after the next.
That's exactly what users are doing, it seems. App Annie, an app analytics and market data firm, recently published a comprehensive report titled, "The Evolution of Social Media Apps," with a focus on live streaming and mobile viewership. According to the report, consumers will spend a whopping 548 billion hours live streaming in the top social apps this year. 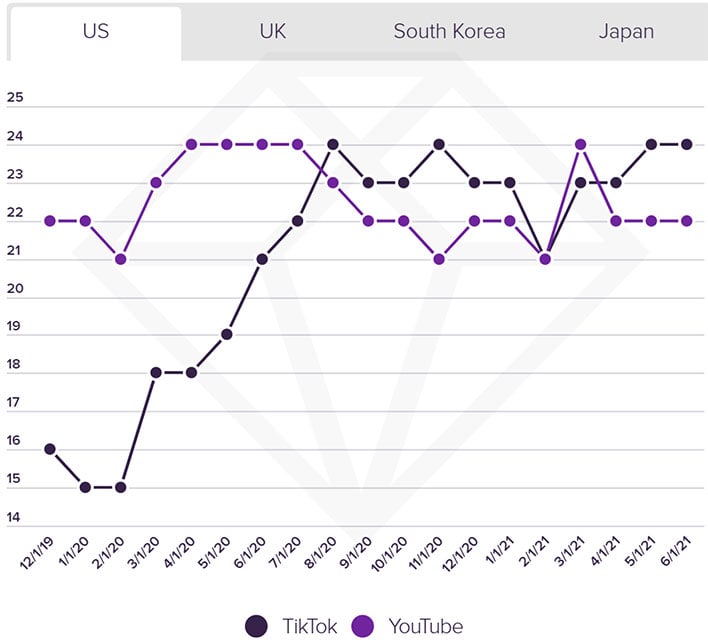 What's especially interesting is looking at TikTok's impact on the landscape. The graph above represents average monthly hours per user, and you can see how TikTok was able to close the gap with YouTube in the US over the past couple of years. And it was around this time a year ago when TikTok overtook YouTube and, for the most part, has maintained its lead.
There are some caveats to this data. For one, it only represents stats complied from Android devices, and it is looking at hours viewed per user, not the total number of users on each platform. That said, it also leaves out stats in China where TikTok is highly popular. 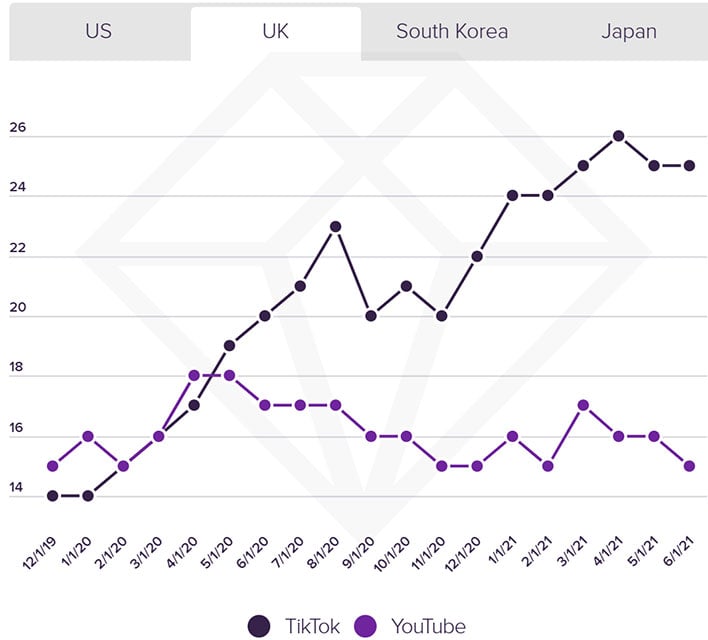 In the UK, the disparity between TikTok and YouTube is even more staggering, with the former overtaking the latter around May of last year and then continuing to rise. As it stands, users in the UK watch around 25 hours of TikTok content per month on average, versus around 15 hours on YouTube. And in the US, users watch around 24 hours of TikTok videos each month versus 22 hours of YouTube videos.
It's too bad the data doesn't take into account iOS users, because it would be interesting to see where things stand as a whole in mobile. But at least among Android users, more time is spent watching TikTok content than YouTube, in the US and UK.
Related to all this, TikTok was the most downloaded social and entertainment app on Android and iOS combined in 2020 and the first half 2021, according to the report. It also ranked highest among consumer spending in 2020, with YouTube coming in second, though in the first half of 2021 they have switched places.
"Consumers are shifting to a model of paying for content creators instead of professionally produced content, illustrating a shift towards authentic experiences. YouTube and TikTok outrank the leading video streaming app, Disney+, showing that consumers are opening their wallets to the creator economy at a level we've never seen before — a positive sign for the industry," the report states.
TikTok is yet more proof that viewers really embrace short-form video. We've seen this multiple times in the past with apps like Vine and Snapchat, and now TikTok. There's more to it than that, and suffice to say, TikTok has found a recipe for success.
Check out the full social media app report to dive even deeper into current trends.