The social media market is constantly shifting and evolving, with new players entering the ring almost daily, it seems. However, just because you have been in the ring for a while does not mean you are at the head of the pack, as newcomer TikTok from ByteDance has now shown. The popular app has hit three billion downloads worldwide, a number Facebook and others have only recently hit after years on the market.

As reported by SensorTower data, TikTok was “was the most downloaded and highest grossing non-game app globally in the first half of 2021, reaching nearly 383 million first-time installs and an estimated $919.2 million in consumer spending.” Though downloads have been on a slump lately, consumer spending in the short-form video app has increased significantly to $534.6 million in Q2 2021, up from $384.7 million in Q1. 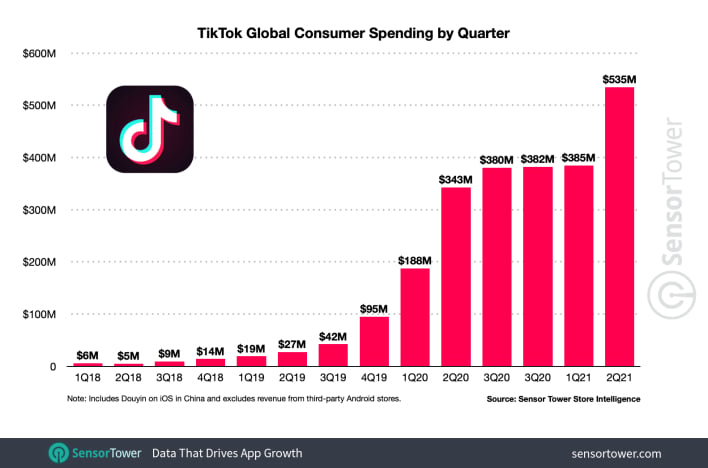 Coupling this data with the recent three billion download milestone, TikTok is now in the realm of Facebook, along with three other non-game apps, WhatsApp, Messenger, and Instagram, to hit the same record. However, new apps are continuing to enter the competitive social media space, forcing TikTok to innovate.

Whether you believe in “slow and steady wins the race” or “may the best man win,” these social media companies must continue to compete and develop. It is interesting to note that Facebook still holds more monthly active users than TikTok does, but that could shift as well. Nonetheless, it will be interesting to watch these companies develop and grow, so stay tuned to HotHardware for updates.