AMD is making a change to its Ryzen Threadripper launch strategy, and with it comes an expansion of its Ryzen Threadripper Pro 5000 WX series processors to more PCs, including the DIY segment. There will not be any non-Pro models, as AMD has chosen to unify its Threadripper and Threadripper Pro product lines.
"Going forward, the Threadripper platform will now use a single 'common infrastructure'. This means there will be one set of Threadripper Pro processors to choose from, with one CPU socket and chipset, and every processor will be based on AMD Ryzen Threadripper Pro silicon," AMD explains in a blog post.
The upshot for consumers is that every Threadripper processor based on Zen 3 will natively offer 128 lanes of PCI Express 4.0, 8-channel UDIMM and RDIMM support, huge L3 cache allotments, and the security and manageability features that are baked in AMD's Pro processors.
What about overclocking? This consolidation doesn't mean you won't be able to rev your Threadripper CPU past its stock settings. AMD says select WRX80 motherboards from its ODM partners will support both CPU and memory overclocking.
Some may find this unifying effort disappointing, though it makes sense to go this route. AMD's mainstream Ryzen desktop processors already scale to 16 cores and 32 threads, and with the advent of stacked 3D V-cache (as currently found on the Ryzen 7 5800X3D), DIY builders can already build a PC capable of workstation workloads without diving in HEDT territory.
Going all-in with its Threadripper Pro lineup allows AMD to pitch enthusiasts and professional users a more robust platform beyond the mainstream segment. It's also retaining compatibility with existing socket sWRX8 motherboard owners based on the WRX80 chipset—it's a drop-in upgrade after a BIOS update.
"In this new 'one socket' world for 'Zen 3' architecture, new motherboards for Threadripper processors will be WRX80 chipset-based. When there is one set of Threadripper processor models, you only need to choose the core count that you want and a motherboard that has the features you need," AMD explains. 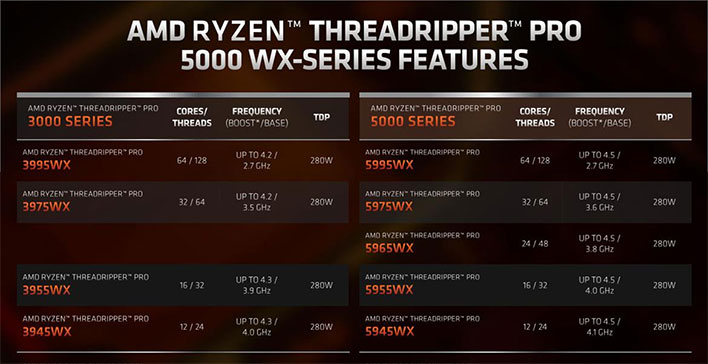 AMD announced five different Ryzen Threadripper Pro 5000 WX-series processors earlier this year, spanning 12 cores and 24 threads on up to 64 cores and 128 threads. Those were initially available exclusively to Lenovo and its ThinkStation P620 workstation. However, AMD has now expanded availability to Dell and its Precision 7865 workstation.
The Ryzen Threadripper Pro WX-series will also be available at "leading system integrators" around the world starting in July, and to the DIY community "later this year." Curiously, the blog post announcing the expanded availability only lists the top three models, including the 24-core/48-thread Ryzen Threadripper Pro 5965WX, 32-core/64-thread 5975WX, and 64-core/128-thread 5995WX.
It's not clear if the 16-core/32-thread 5955WX and 12-core/24-thread W5945WX SKUs will be offered in the DIY segment. Those could be causalities of the unifying effort, as enthusiasts might be more drawn to the comparative bang-for-buck proposition of the Ryzen 9 5950X or 5900X.
In any event, the Threadripper Pro 5000 WX series is indeed headed to the DIY market. Whether it arrives before Zen 4, we'll have to wait and see.