Much has been written already, both here and elsewhere, about the issue of melting 12VHPWR connectors on GeForce RTX 4090 cards. If you're new to this topic, the shortest summary is that recent GeForce cards use a new type of auxiliary power connector, and those connectors have been smoking and melting for a few users.


Many have theorized extensively about the cause of the failures, and for its part, NVIDIA hasn't said much beyond that it was looking into the issue. It's a rare problem—around 0.05 to 0.1% of users, according to manufacturers—and NVIDIA and its partners have been taking care of affected customers, so there's not too much to complain about.
Still, the source of the issue is mysterious, and that's what's concerning about it. At least, it was mysterious until today. The boys at Gamers Nexus thoroughly researched the problem and have posted a thirty-minute video going over the causes of the problem. If you're in a hurry, we'll spoil it for you: you're plugging it in wrong.


GN's commentary is more nuanced than that. The YouTubers say that they have identified two specific causes for connectors melting. One is foreign object debris (FOD) in the connector. This can happen due to manufacturer error or the user's environment, but either way, debris in the connector could cause current to travel a "parallel path." That path will likely have very high resistance compared to the intended path, and that's going to generate excessive heat. 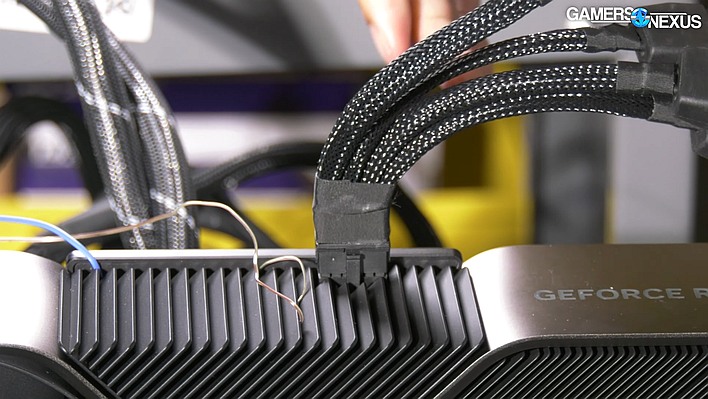 A connector that feels right but still isn't fully-inserted.


The other issue, which we feel (and GN states) is drastically more common, is "serious" user error. Just like Jon Gerow (aka Jonnyguru) stated last week, if you don't fully insert the connector, it's possible that it can make a poor connection and overheat. GN actually tested this in a previous video on the problem, and couldn't make it cause a melting connector, but as Steve himself admits, he simply underestimated the degree to which the connector needed to be "poorly installed."


The connector has 6.5mm of insertable length, and we can attest ourselves that both Steve and Jon are correct when they say that it is deceptively difficult to fully install. It's very easy to get it into a state that it seems fully-inserted, but actually isn't, and this state can make it possible for the connector to wiggle out of place, especially if you're fooling around with cable management on the other side of the chassis. This poor installation can cause the connector to be angled, which significantly increases the likelihood of an improper connection, which in turn could cause overheating and melting.
Steve is adamant that the failures are not down to one type of adapter or other, as these failures can affect either Astron or NTK sourced adapters and have even happened with native 12VHPWR cables—no adapters necessary. He says that "all 12VHPWR connectors can fail in one method or other," but also that his objective opinion is that the connector itself is completely safe. As he points out, the failures are extremely rare.


Ultimately, the video concludes, a failure could happen to anyone if you get a faulty connector, but that's true of any product. To protect yourself from user-caused failures, it is critical that you seat the connector fully in the socket—try to gently pull it loose after to make sure—and that you then don't pull it taut with your cable routing. That'll let you avoid a situation where it "starts out acceptable but incorrect, then gets tugged to meltable" either as cable routing is managed or from system vibrations (e.g. case fans) over time.

We do recommend watching the video if you have time, as it's quite interesting to see the lengths that GN went to in attempting to find the real cause of this problem. The channel sent user-supplied connectors off to a failure analysis laboratory, where they were x-rayed, dissected, and scanned with an electron microscope. Kudos to Gamers Nexus for going the extra mile, although it really seems like NVIDIA should have done this itself.