Of all the cars running the streets today, few rely on software more than the Tesla range of electric vehicles. Tesla sells upgrades that unlock additional capabilities hidden inside its vehicles for an added cost. One such software upgrade for the Tesla Model 3 is the battery upgrade unlocking additional range and the Acceleration Boost feature for the Model 3 Dual Motor. Some hackers have been able to unlock performance boosts without paying Tesla, and the automaker is fighting back.

A company called Ingenext produces a device that allows Tesla owners to unlock Tesla's $2,000 Acceleration Boost feature for the Dual Motor version of the Model 3 for $1,000. The device the company sells unlocks an additional 50 horsepower and reduces the 60 mph acceleration run to 3.9 seconds. 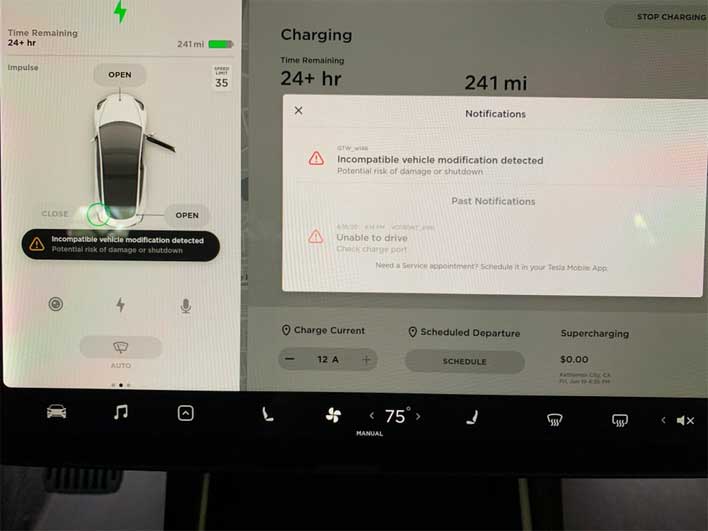 Users who have seen this warning say that the vehicle is still drivable despite the warning. However, they do say that the notification stays stuck on the screen. Ingenext founder, Guillaume Andre, says that Tesla patched the company's update of the driver inverter software that unlocked the capacity with its software update 2020.32.1.

Andre says that his company sent a notification to clients warning them not to update their software and that three customers updated their cars before seeing the warning. The company is working on a patch to allow customers to update their software without issues with Andre promising the patch could be a week or two away. Hacking Tesla cars is nothing new. Hackers were able to disable autopilot notifications, speedometer, and climate controls in the past.