Tesla has become synonymous with electric vehicles, but its latest product is one that probably caught everyone off guard—an electric "Cyberquad for Kids" priced at $1,900. It's basically a smaller version of the adult-sized Cyberquad ATV (all-terrain vehicle) it rolled onto stage two years ago during its Cybertruck event, and which has yet to ship.

This time around, there was no grand unveiling in front of a live audience. However, Tesla's chief designer Franz von Holzhausen posted a video of the kid-sized Cyberquad ATV on Twitter. In it, he and two kids each tear through dirt terrain on Cyberquads, giving us a glimpse of the ATV in action. There's nothing too wild, though. Have a watch...

Out riding with the kids on the Cyberquads! So much fun for kids and adults! @tesla pic.twitter.com/gq23GWsiDk

According to the product page, the electric Cyberquad is intended for kids 8-years-old and up. It was designed to mimic the overall aesthetic of the Cybertruck design and features a full-steel frame, an adjustable suspension, rear disk braking, a cushioned seat, and LED light bars. It's powered by a lithium-ion battery that Tesla claims is good for 15 miles (or more) of run time.

There are two forward speed settings: 5 miles per hour and 10 miles per hour. It can also go in reverse, at 5 miles per hour. Like the battery life, a rider's top speed will depend on their weight (and the terrain). Tesla rates the maximum weight capacity at 150 pounds. The Cyberquad ATV itself weighs 122 pounds. 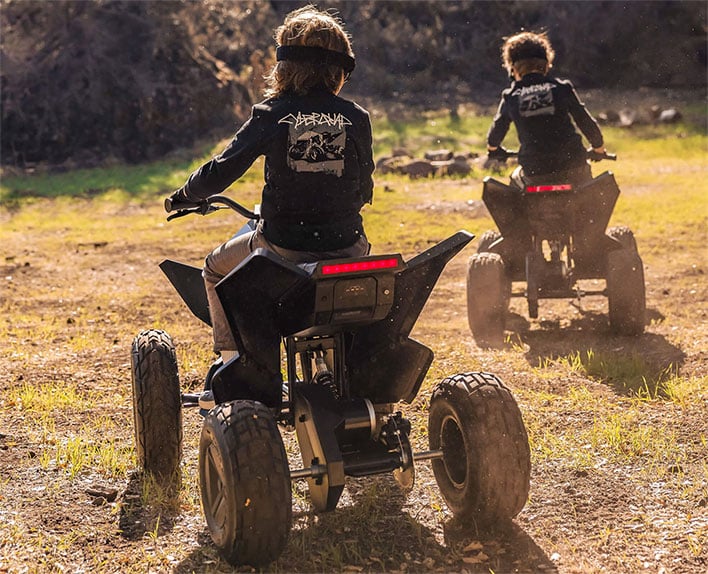