Tesla is on a mission to deliver its mainstream electric vehicles like the Model 3 and the Model Y to as many people as possible. Unfortunately, to reach those goals, the company’s more ambitious projects like the Semi and Cybertruck have taken a back seat on their way to production. Both of those vehicles have been delayed until at least 2022.

Now, the company’s second-generation Roadster is getting another delay of its own. Tesla CEO Elon Musk originally announced the Roadster in late November 2017 and said it would enter production in 2020. But, as is typically the case with new Tesla launches, 2020 came and went with no production window in sight for the Roadster. 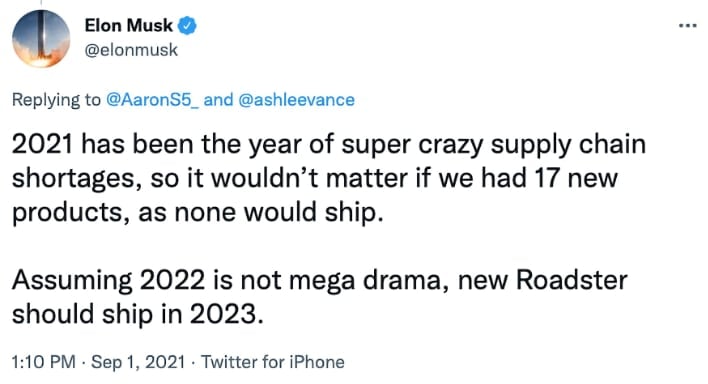 Now, Elon Musk confirms that the Roadster won’t launch this year or even next year. Instead, he says the Roadster will debut in 2023, “assuming 2022 is not mega drama.”

While this is disappointing news for the reservation holders that either plunked down a $50,000 deposit or the full $250,000 for a Founder Series, the Roadster likely isn’t a priority for the company. Instead, being that it’s a “look at me” halo car, Tesla is shifting resources to vehicles on the horizon that will bring in a steady flow of cash like the Semi and Cybertruck. 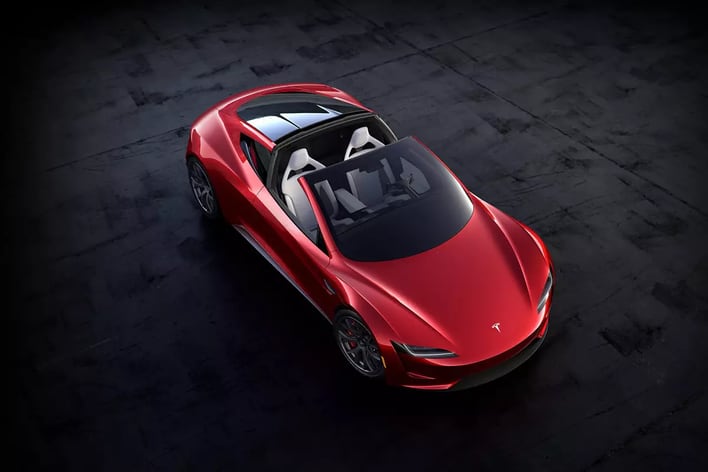 And when it comes to performance, the Model S Plaid is holding its own with 0-60 time of 1.9 seconds. But the Roadster will be even faster, according to Musk. When he announced the Roadster, he said it would hit 60 mph in 1.9 seconds. However, Musk confirmed in May that an optional “SpaceX rocket thruster option package” would drop that time to a neck-breaking 1.1 seconds. Musk then added, “Probably not wise for those with a medical condition – same as a hardcore roller coaster.”

The Roadster’s acceleration numbers aren’t the only impressive stats. It will reportedly hit a top speed of 250 MPH and will be able to travel up to 620 miles per charge, which is over 200 miles further than the current Model S Long Range. This is all made possible by a 200 kWh battery pack nestled low to the ground between the front and rear wheels.

Elon Musk has made plenty of claims about the Roadster over the years, so let’s hope that the vehicle lives up to the hype if it launches in 2023.