The world collectively laughed at the Tesla Cybertruck when Elon Musk unveiled it in California nearly a month ago, but it appears that there is still plenty of interest in the odd-looking electric vehicle. The Cybertruck is billed as being the biggest and baddest half-ton pickup around, and Musk repeatedly compared the truck to the best-selling Ford F-150, and even used a sketchy (and disproven) tug-of-war video to show its skills (see the video further down in this article).

Musk just revealed that Cybertruck preorders have ballooned, rising from 146,000 over the weekend to 250,000 as of last night. That means that the potential value of those orders -- if all of those customers stick with their reservations -- approaching the $15 billion mark.

We should note, however, that Tesla is only requiring a $100 refundable deposit, which is far lower than the $1,000 required for Model 3 preorders a few years ago. That could be artificially fueling purchase interest in the Cybertruck, but nonetheless, it shows that there is at least a market for such a beastly EV.

In other Cybertruck news, Musk took to Twitter to explain why the demo where a steel ball was thrown at the driver's side windows failed during the official unveil. It all comes down a matter of procedure, according to Musk. In short, the preceding demo where a sledgehammer was slammed into the thick cold-rolled stainless-steel body panels weakened the bottom portion of the glass. Then, when it came time for the steel ball demo, the added stress resulted in the glass failure.

Yup. Sledgehammer impact on door cracked base of glass, which is why steel ball didn’t bounce off. Should have done steel ball on window, *then* sledgehammer the door. Next time …

According to Musk, had the demos been reversed, all would have been well. However, that still doesn't explain why the rear glass failed even though only the front door was hit with the sledgehammer...hmm. While it's nice to hear an explanation for the demo "fail", the events that took place on stage are likely to have a lasting effect on public perception of the truck -- at least in the near-term. 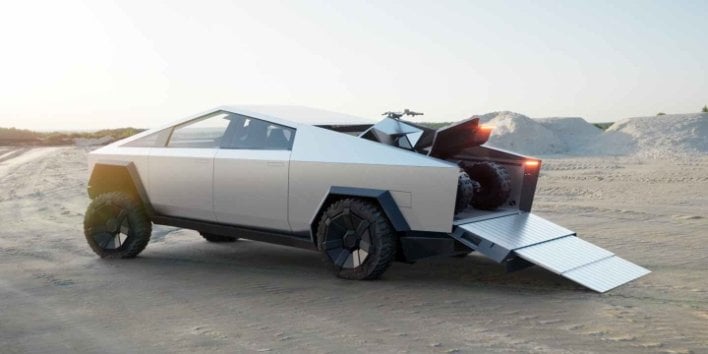 The Tesla Cybertruck will be available in single-, dual-, and triple-motor configurations with drive range that tops out at 500+ miles. The base price of the truck is $39,999, while the flagship model starts at $69,990.