The mega-popular exploration, platforming, gathering, combat, mining, base building, all that and the kitchen sink-containing, 2D side-scroller Terraria turned 11 this year. The Labor of Love update arrived last month to celebrate the communities that have developed around it. It represented one of the largest updates the game has seen with the goal to "round out and polish the Terraria experience." The update did see its fair share of flaws, though, much of which has now been patched.

Terraria has gathered a rather strong following. It currently sits at the 15th most played game on Steam, and is even on sale today for only $4.99. At the time of writing, the peak players for the title sits at a pretty hefty 50,622, thanks to insights from the new Steam Charts page. While these numbers are not big when comparing to something like Counter-Strike: Global Offensive or DOTA 2, it's still pretty impressive for an 11 year old indie title. 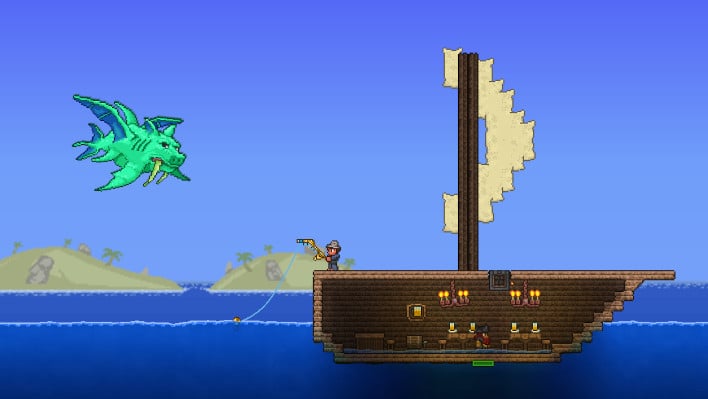 Even though the big parts of the update came out about a month ago, we'll admit it's been a while since we've traversed the terrain of Terraria, so we'll go through the patch notes for version 1.44, there is also a hotfix which brings it to version 1.44.1. There is so much that it is not all that feasible for us to list the details, so we're going to give you the headlines and key pieces as as best we can.

Within the update there is a massive, and we really do mean massive, set of changes. There are, at least, 263 new features, content changes, and bug fixes so we'll just focus on a few of them. First up, some updates to seeds. If you truly feel you're worthy, what is considered Classic difficulty on the For The Worthy (FTW) seeds, is actually now Expert, while Expert has become Master. Good luck there! On Not the Bees, the Bestiary should be able to be 100% completed, and Spider Caves will generate within the seeds. In Don't Start Seeds, Darkness Damage has changed from 50-250, and the time before being hurt has been reduced from 8 to 4 seconds. That means if you are caught out in the dark, it'll be much more difficult to survive.

On the lighter and more fun side, there are now 8 Slime Town Pets. There are over 300 new items, 25 new blocks and walls, 55 new paintings, a new tree, 3 new furniture sets, new vanity accessories and items and the hilariously named Fart Kart.
UI updates and other additions make player quality of life better. These updates include equipment loadouts, allowing the F1-F3 keys to now swap between these loadouts. Almost all stacks of items can now reach the top threshold of 9,999, which is great—it got so tiring have multiple stacks of things you wanted to keep but then you couldn't pick up another thing you wanted or needed. You can also stack voodoo dolls, if you dare. Remember that you can throw stacks, so be careful. The void bag can be now opened and closed with a simple right click for a simple quality of life update too. These are just a few of the quality of life changes we thought were fun, useful, or funny, but there are definitely more.

To round off the changes, some simple pieces are as follows. There are new words for random world name generation, new sounds, a new death message, and new achievements. The rope and minecart tracks now interact, which helps in preventing one or the other from breaking. Players will no longer collide with platforms when on a rope pully, allowing ropes to drop past platforms and players to use them in such a manner. Previously, smashing alters would generate random blocks of infection in the world, but not anymore. Traveling merchants always had a guaranteed item slot, and now there's another. Critter Cages can be now stacked, and even stood on, so you can create a ladder of dangerous fauna if you so desire! 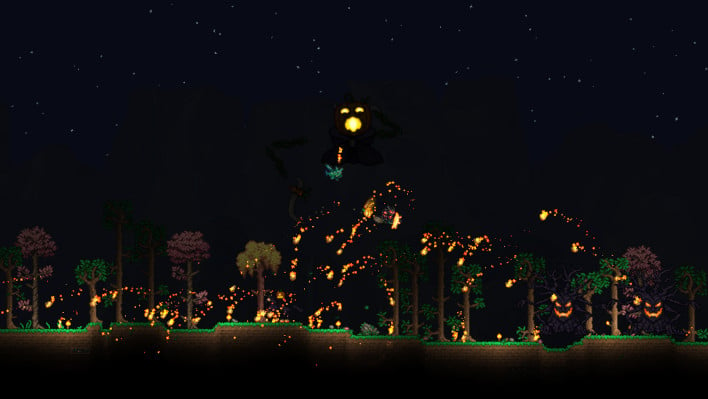 
Again, this is just a small sample of all the changes, as stated we can't really list them all otherwise we'd all be here forever. Luckily, the developers kept a pretty solid log of all that's been worked on, so you can view the massive change log, as well as bug fixes here.