Steam Says Goodbye To Its Stats Page And Replaces It With Real-Time Charts, Check It Out

Sadly, the Steam Stats Page is no more. However, Valve has already replaced it with something that looks and behaves far better, Steam Charts. It provides live data views of most played and top-selling games. The top-selling breakdown even takes DLC sales into account now, too. This change comes closely behind another Steam update which makes it easier to find games you might be interested in playing.

Valve has made the main overview page of the new charts give a quick rundown of currently playing and peak player count on Steam over the last 24 hours. It also provides users with the top five most played and top selling games as of that moment. Of course, it also links to a few of the other stat pages and Steam's hardware survey, download stats, and support stats. 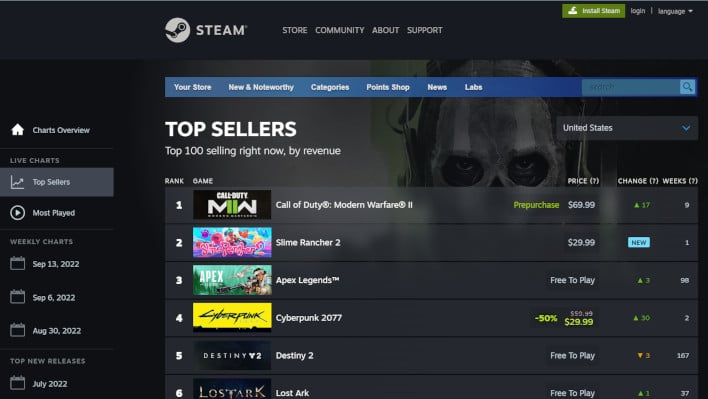 Not only do we receive a better visual outline of what's top currently, but there are also weekly and monthly pieces as well. These show the top selling games and products, by revenue, for each of the respective time periods. The weekly option is relatively limited, in that it only shows top selling products from the previous week. The monthly option, though, shows the top 20 selling products, the top free to plays, top DLC, a selection of top genres, and top new developers.

The inclusion of the number of weeks on the top sellers chart as well as the trend of movement per title is an interesting addition to the top sellers' chart. Users can even choose to explore top sellers in a given region, very similar to the well-known music charting organization, Billboard. 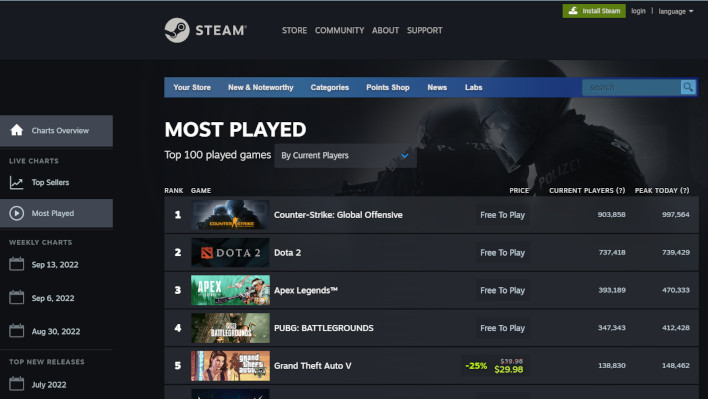 What would gaming data be without that most played feature? The most played list shows the top 100 games based on the number of players in those games right in that moment. There is also an option to swap it to daily players, showing the top games in the last 24 hours.

How this new method of displaying data from Steam will affect other stat gathering web sites for Steam like steamdb.info is yet to be seen. That said we think this live data is very interesting and may actually be something that shows market driving indicators. For example, as of this writing, both the current and daily most played game on Steam is Counter-Strike: Global Offensive, followed by Dota 2, and then Apex Legends. So, what do those games offer that keep players coming back? Besides their free-to-play model, we're sure to gain more insights thorough statistical analysis thanks to this in the future and we're looking forward to it.