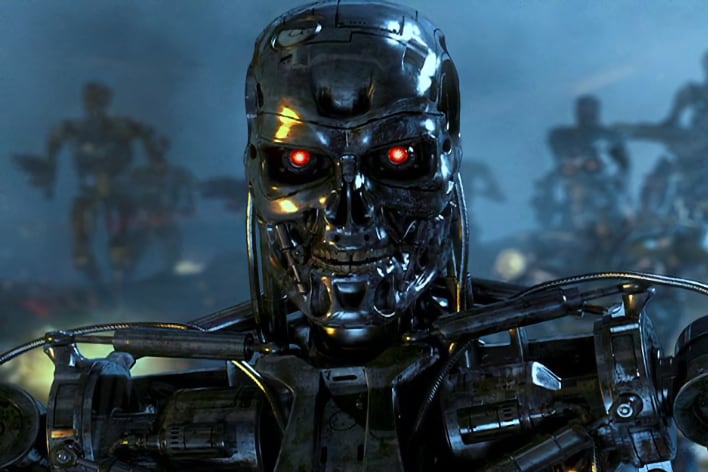 Fortnite is famous for its crossover events, which brings widely popular characters from pop culture into the game for a limited (or sometimes, extended) period of time. We've seen events that have centered around the Marvel Cinematic Universe, Star Wars (i.e. The Mandalorian), Stranger Things, and even John Wick. Heck, even Master Chief has made an appearance. Now, Epic Games is teasing a potential crossover with another popular film franchise: The Terminator.

Speculation is mounting given that Epic posted a rather ominous teaser this morning with the description "Targets Description: A ruthless machine and a protector of the future". The video simply shows a satellite in the center of the screen, with a voice that belts out, "On this latest stop, though, I met a hero that can relate. Impending global doom, time travel, paradoxes. Oh yeah, she'll fit right in."

:: Incoming Transmission - Reality Log 991 ::
Targets Description: A ruthless machine and a protector of the future pic.twitter.com/LGXiAadncR

That sounds like the film The Terminator to us, and more specifically the badass known as Sarah Connor (more so in the Judgement Day than the first film) along with the "ruthless" T-800. You know, that cybernetic organism that is living tissue over a metal endoskeleton.

This wouldn't be the first time that characters from The Terminator film franchise have made their way over to the game world. Most recently, we've seen Arnold Schwarzenegger's portray of T-800 make an appearance in Mortal Kombat 11, while he was also a fixture in the Gears 5 Dark Fate Pack. Making the leap over to Fortnite seems like the perfect opportunity to keep the franchise relevant with younger audiences.

Right now, Fortnite is in the midst of Chapter 2 Season 5 which focuses on The Zero Point and bounty hunters.