Earlier this week, WhatsApp unveiled a new privacy policy that effectively forced users to share data with Facebook. For an app that touted its user privacy and end-to-end encryption in the past, this recent development is none too kosher. It did not sit well with many users and prominent ones, like Elon Musk, who quickly and directly suggested on Twitter to switch to Signal.

After Facebook bought out WhatsApp, there were concerns that the app would head down the wrong path as far as data privacy goes. It appears now that those concerns were on the mark, as Facebook will now be collecting data from the app starting on February 8th. If you do not want data collected, you do not have an option to opt out either, as Facebook only offers users the ability to deactivate their accounts. Thus, many people are likely in the market for a new messaging app with privacy at its core, and the primary candidate it seems is Signal.

That's @signalapp, for those who don't speak Elon. https://t.co/NA1PV9FN1o

Signal is a private chat client with end-to-end encryption created by Signal itself. They claim that they cannot read messages or listen to calls, and therefore no one else can either. The website for Signal states that “Privacy isn’t an optional mode — it’s just the way that Signal works.” The platform touts’ users such as Edward Snowden, famed whistleblower, and Jack Dorsey, CEO of Twitter. If you want to see how Signal stacks up against other messaging clients, we collected Apple's privacy labels showing what data is linked to you through each app. 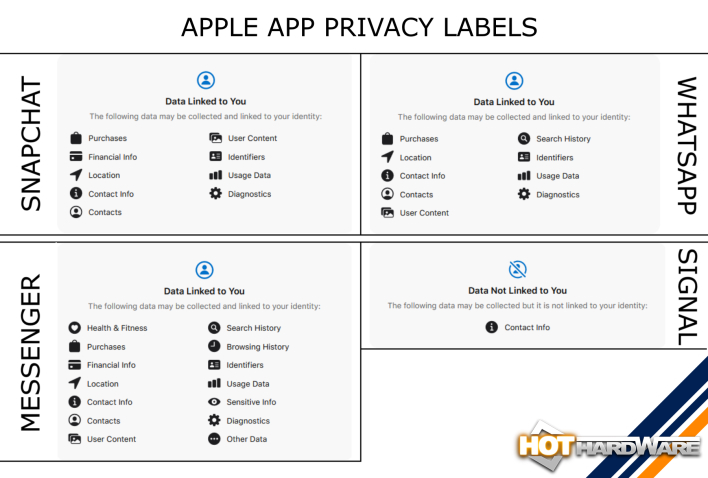 While Signal's popularity is growing, Microsoft also reminding people that Skype still exists as a good option for secure messaging, which it may be. The Twitter account for Skype tweeted the following a few days ago, linking to Microsoft’s privacy policy.

Skype respects your privacy. We are committed to keeping your personal data private and do not sell to 3rd parties: https://t.co/FLGwMmSNHv pic.twitter.com/dupbfejr7m

Overall, it does seem that Signal is the current best option for private communications. Messaging clients seem to come and go like the wind, though, so that could change at some point in the future. Either way, being able to keep tabs on your own data is worthwhile, even if it takes changing platforms from time to time. Maybe eventually, the major communications players will learn to keep data truly private, but until then, as Elon Musk says, take matters into your own hands and use Signal.