The Microsoft Surface Laptop 3 is the latest iteration of the device and launched in October of 2019. Some owners of the laptop have reported seeing hairline cracks randomly develop on the screen. Yesterday, Microsoft confirmed the screen cracking issue via its Surface Support page and has stated that it will be repairing screens that crack, in certain circumstances, at no cost to the owner. Owners of impacted Surface Laptop 3 PCs who paid out of pocket for repairs will be reimbursed for that expense.

As for what caused the screens to crack seemingly out of nowhere, Microsoft wrote in the support update that it had determined in a "very small percentage" of cases, a "hard foreign particle" could cause a hairline fracture in the glass. The cracks "may seem to appear unexpectedly or without visible cause," according to the support page. 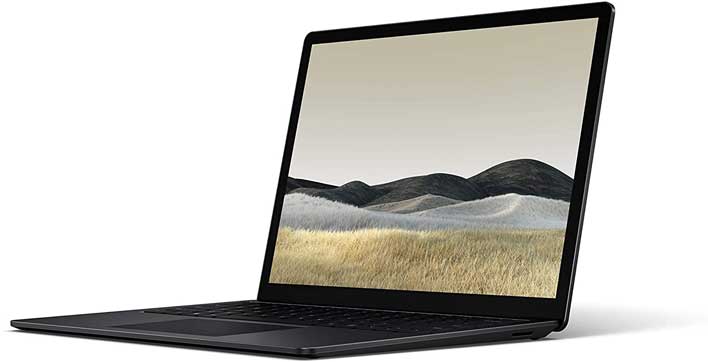 Microsoft invites any Surface Laptop 3 owner who believes they are experiencing this issue to contact Microsoft Support to begin the free repair process. One potential caveat is that any repair must be made inside the warranty period for the laptop. Owners who have previously paid out of pocket to have screen cracks repaired can use the Microsoft Support page to learn about possible reimbursement.

The reimbursement and free repair program is open to owners of both 13.5-inch and 15-inch versions of the Surface Laptop 3. Initial reports of spontaneous screen cracking surfaced in February 2020, indicating the cracks were associated with machines featuring aluminum cases. The cracking issue didn't appear to impact laptops with Alcantara fabric covering.

Presumably, the "hard foreign particles" that caused the screen cracks were somehow introduced during manufacturing, and the issue has been remedied. Microsoft has offered no insight into what caused the introduction of foreign particles. Naming conventions for the Surface line are somewhat confusing. The Surface Laptop 3 isn't to be confused with the Surface Book 3 that launched last week; they are different devices. Microsoft also launched an updated Surface Go 2 along with new audio products last week.