There are plenty of gadgets you can play games on—PCs, dedicated game consoles, tablets, smartphones, and so forth. Will wearables represent the next gaming frontier? We'll have to wait and see, but Tag Heuer has taken a step in that general direction with its Connected Super Mario Limited Edition smartwatch.
A themed smartwatch is one thing, but this takes things a little bit further. This limited run timepiece designed in collaboration with Nintendo infuses the iconic plumber and other related characters, as you might expect. But it does not stop there. Tag Heuer has implement a "gamification rewards system" to nudge users into being more active.

It's largely about the animations. Mario will give wearers a hearty salute first thing in the morning, and then he and other characters will get "livelier and more animated the more the wearer is active." At least part of this will apply to step counts—wearers will be rewarded with different animations at various step goals (25 percent, 50 percent, 75 percent, and 100 percent).
Users can calibrate their daily step goals, based on how active they are or want to be. Beyond those animated rewards, the watch features some unique designs elements, including several different watch faces, a customizable dial, and detailed Super Mario accents, like an "M" icon on the crown in red lacquer. Pretty snazzy. 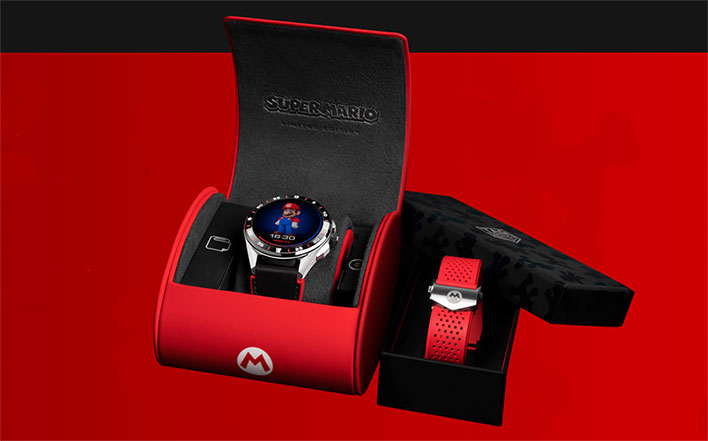 "The Tag Heuer Connected Super Mario Limited Edition brings you a cutting-edge experience with a surprise twist: four exclusive watch faces focusing on playfulness through Super Mario patterns, an exclusive splash screen, as well as a Mario animated watch face which encourages you to get out and step up your physical activity with Mario," Tag Heuer explains.
Just like in the video game, Mario will get bigger when consuming a mushroom. He will also duck into pipes and come to life in various other ways familiar to Super Mario fans (which is just about everybody). And it all runs on Wear OS.
This is a 45mm smartwatch, and according to Tag Heuer, battery life checks in at anywhere from 6 to 20 hours, a pretty wide range for sure. The real catch, however, is the shockingly high price—Tag Heuer is limiting the production run to just 2,000 units, and will sell them for $2,150 a pop. Yikes!
Hey, that's a veritable bargain compared to the $1.56 million someone paid for a Super Mario 64 cartridge earlier this week. There could be more Nintendo-themed models on the horizon too, at potentially cheaper price points—Tag Heuer says this is the "beginning of a long-term collaboration" with Nintendo.
If you are interested, you can head over to the Tag Heuer Super Mario page and register for more info as it becomes available.