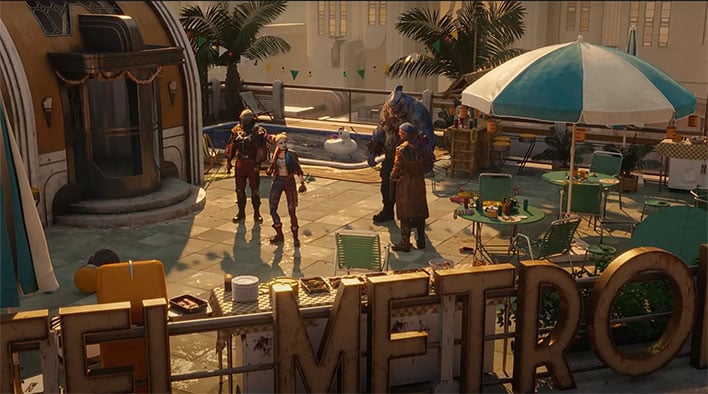 It has been a long time coming-- the Batman: Arkham developers have finally announced a standalone Suicide Squad game. Rocksteady Studios recently released a teaser trailer for Suicide Squad: Kill the Justice League. The game will be available in 2022 for Windows, the Playstation 5, and the Xbox Series X.
The trailer features Deadshot, Harley Quinn, Captain Boomerang, and King Shark as they take down Brainiac's minions and search for an “Alpha Target” in the middle of Metropolis. It is revealed at the end of the trailer that the “Alpha Target” is Superman who has been possessed by Brainiac. Hence the name of the game- Suicide Squad: Kill the Justice League.
Suicide Squad: Kill the Justice League is an action-adventure game that is set in the Batman: Arkham universe. The storyline established in the previous Batman: Arkham games will remain relevant in this upcoming game. Solo players will be able to switch between all four of the characters featured in the trailer. The characters that the player is not actively controlling will be managed by artificial intelligence. There will also be a chance to play with up to three friends in a cooperative mode.

This particular game is a bit of a surprise to players. It was originally believed that Rocksteady Studios was working on a Superman game. However, it was revealed this past spring that Warner Bros. reportedly rejected the game before it could really get off the ground. Superman instead makes an appearance in Suicide Squad: Kill the Justice League as a “villain” instead of a hero.
Suicide Squad: Kill the Justice League was revealed this past week during a panel at DC FanDome. There were also several announcements about upcoming movies, a Netflix series, and another new video game. Gotham Knights is an action-adventure game that is being developed by WB Games Montréal. It should be released sometime in 2021. The game takes place several years after Batman’s death and includes Nightwing, Batgirl, Robin, and Red Hood. Solo players will be able to flip between these four playable characters, but the game will only feature a two-player co-op mode instead of a four-player co-op mode. It will be available on Windows, the PlayStation 4, PlayStation 5, Xbox One, and Xbox Series X.